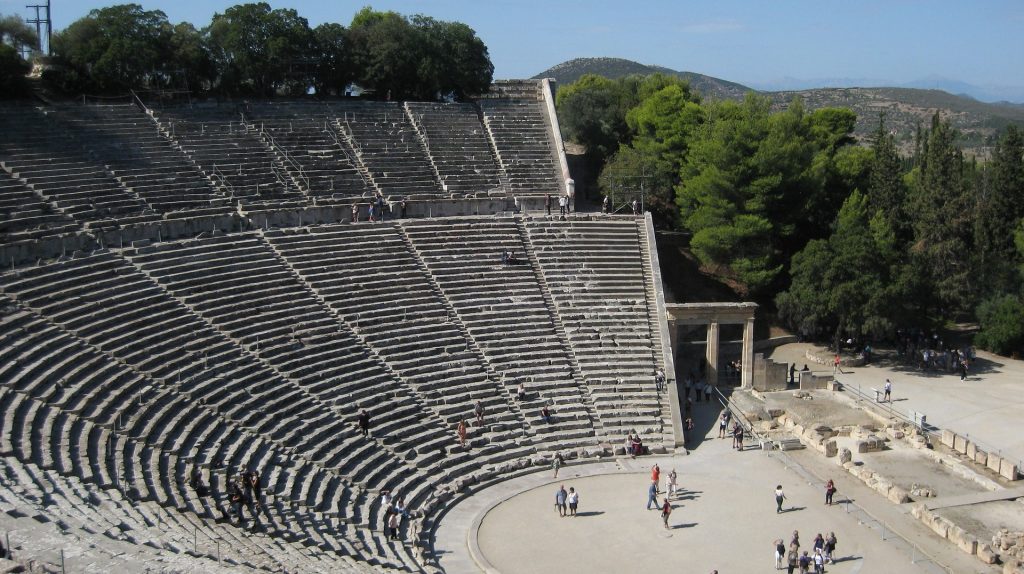 Epidaurus is one of the most important archaeological findings reflecting the splendor of Greek culture through its imposing beauty.

You can explore Epidaurus to find out why it was known for its sanctuary situated about five miles (8 km) from the town, as well as its theater, which is once again in use today, is a UNESCO world heritage site.

Three mountains form a natural perimeter which embraces the town, protecting from the winds and giving it an exceptionally mild climate. Clear running waters, beautiful natural landscapes and beneficial climatic conditions served to create the ideal place for the healing of man with the power of the gods.

The Asclepeion at Epidaurus was the most celebrated healing center of the Classical world, the place where ill people went in the hope of being cured. Within the sanctuary there was a guest house with 160 guestrooms. There are also mineral springs in the vicinity, which may have been used in healing.

Asclepius, the most important healer god of antiquity, brought prosperity to the sanctuary, which in the 4th and 3rd centuries BC embarked on an ambitious building program for enlarging and reconstruction of monumental buildings.

Even after the introduction of Christianity and the silencing of the oracles, the sanctuary at Epidaurus was still known as late as the mid-5th century as a Christian healing center.

Today its monuments apart from being recognized as masterpieces of ancient Greek art they are also standing proof of the practice of medicine in antiquity. They illustrate the medical evolution from the time where it was believed that healing depended on God to the time where it developed into science based on a systematic knowledge through accumulative experience.

The therapies and treatments practiced by the mystic-physicians were extremely sophisticated. Centuries of observation of nature, the human body and the interdependence of mental harmony and physical health created a complex medical context for healing, which proved extremely effective.

Over the years the accumulated experience of the priests, together with the effective synergy of the incomparable climate and natural surroundings of the land, led to highly successful medical treatments. This resulted in a veritable swarm of visitors seeking treatment, not only from within Greece, but also from countries far away.

Each activity which took place at Epidaurus was designed to harmonize the mind, body and soul. At the theatre visitors could attend performances and “escape” from their small, debilitating everyday problems. Music, theatre, and the reading of philosophical texts prepared the soul to achieve the ultimate healing of the body.

The patient, after the necessary cleansings and having reached a calm and mentally relaxed state, was led to the main therapeutic area, the Abaton. This was a mysterious dome shaped structure, with mystagogical corridors and complex circular mazes. The architecture of Asclepieion is still remarkable today. The building was circular, referencing the safety and security of the maternal embrace. The layout of the sanctuary served to focus the concentration of the patient and draw strength from his inner world.

During the fourth and third centuries BC buildings were erected in both the mountain and plain sanctuaries; the Classical temple, the altar of Apollo, the Great Stoa, the priests’ residence and the Temenos of the Muses.

The prosperity brought by the asclepeion enabled Epidaurus to construct civic monuments, including the huge theater known for its symmetry and beauty, used again today for dramatic performances.

As is usual for Greek theatres, the view on a lush landscape behind the stage

is an integral part of the theatre itself and is not to be obscured. It seats up to 14,000 people.

The theatre is admired for its exceptional acoustics, which permit almost perfect intelligibility of unamplified spoken words from the stage to all 14,000 spectators, regardless of their seating

The astonishing acoustic properties may be the result of advanced design: the rows of limestone seats filter out low-frequency sounds, such as the murmur of the crowd, and also amplify the high-frequency sounds of the stage.

Explore Epidaurus yourself to feel some of its magic as well.

Watch a video about Epidaurus