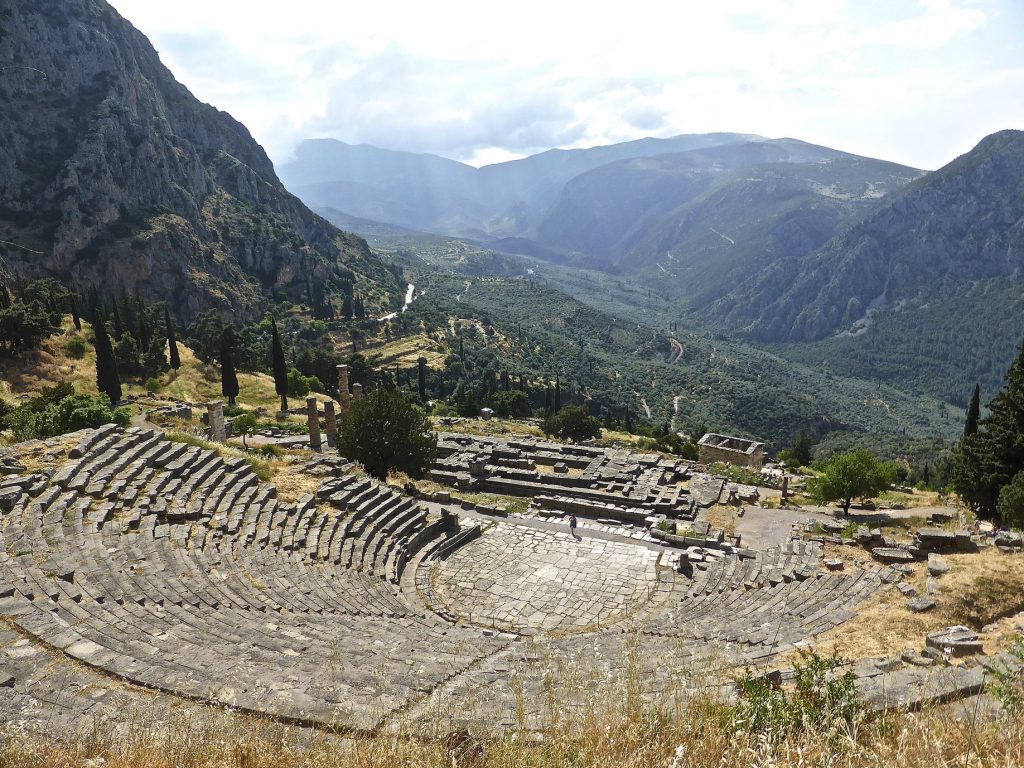 Delphi had the most famous oracle of ancient Greece and was regarded as the center of the world. Explore Delphi, a world heritage site having had a phenomenal influence in the ancient world, as evidenced by the rich monuments built there by most of the important ancient Greek city-states, demonstrating their fundamental Hellenic unity.

The site is also protected as a site of extraordinary natural beauty, and the views from it are also protected. No industrial buildings are to be seen from Delphi other than roads and traditional architecture residences even high voltage power lines are routed so as to be invisible from the area of the sanctuary.

Delphi became the site of a major temple to Phoebus Apollo, as well as the Pythian Games and the prehistoric oracle.

The history of Delphi begins in prehistory and in the myths of the ancient Greeks. The earliest finds in the area of Delphi, date to the Neolithic period (4000 BC). The first stone temples of Apollo and Athena were built towards the end of the seventh century BC.

Delphi was since ancient times a place of worship for Gaia the goddess mother connected with fertility.

In the sixth century BC, when the sanctuary was made autonomous, it increased its territory and political and religious influence throughout Greece, and reorganized the Pythian Games, the second most important games in Greece after the Olympics, which were held every four years.

Between the sixth and fourth centuries BC, the Delphic oracle, which was regarded as the most trustworthy, was at its peak. It was delivered by the Pythia, the priestess, and interpreted by the priests of Apollo. Cities, rulers and ordinary individuals alike consulted the oracle, expressing their gratitude with great gifts and spreading its fame around the world.

The oracle was thought to have existed since the dawn of time. In Roman times, the sanctuary was favored by some emperors and plundered by others but this did not stop it and only spread its rumor further.

Pausanias detailed description of the buildings and more than three hundred statues has greatly contributed to the reconstruction of the area. The Byzantine emperor Theodosius finally abolished the oracle and the Slavs destroyed the precinct in 394 BC. With the advent of Christianity, Delphi became an episcopal see, but was abandoned in the sixth-seventh centuries AD. Soon after, in the seventh century AD, a new village, Kastri, grew over the ruins of the ancient sanctuary, attracting in modern times several travellers interested in antiquities.

Archaeological research in Delphi began in 1860. The Great Excavation uncovered spectacular remains, including about three thousand inscriptions of great importance for our knowledge of public life in ancient Greece.

From the entrance of the site, continuing up the slope almost to the temple itself, are a large number of statues, and numerous so-called treasuries. These were built by many of the Greek city states to commemorate victories and to thank the oracle for her advice which was thought to have contributed to those victories. These buildings held the rich offerings made to Apollo were a tenth of the spoils of a battle.

Watch a video about Delphi