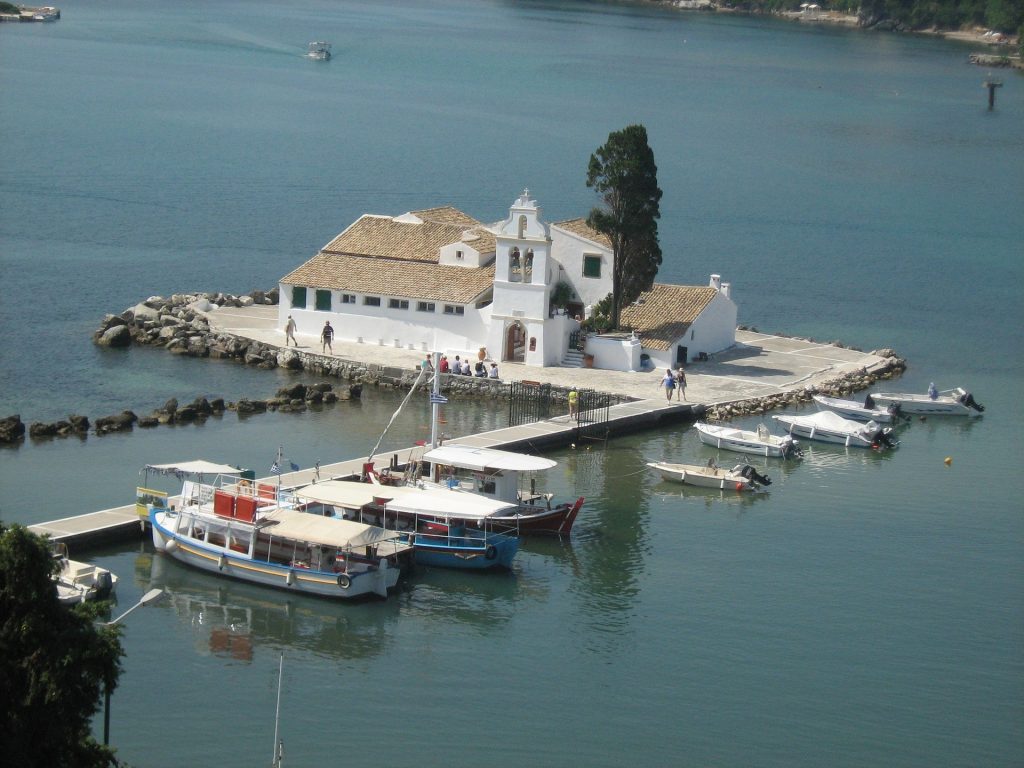 Explore Corfu or Kerkyra a Greek island in the Ionian Sea and the second largest of the Ionian Islands with a glorious past.

It combines a rich multi-cultural heritage, historic monuments, amazing natural landscape, crystal clear deep and cool sea waters, lush vegetation excellent weather all year round and with the cheerfulness of the inhabitants, it is the ideal place for a holiday as well as rest and relaxation.

It is one of the most cosmopolitan destinations weaving a powerful spell on its visitors.
What is more, its traits are perfectly combined with a flawless tourism infrastructure, excellent hotel accommodations, restaurants, diving centers, sea sports, cultural events, and a multitude of sights, historic monuments and museums worth visiting.

Corfu has a mild and temperate climate which makes it the ideal location for vacation or residence.  In winter, the mountains of Central Greece stop the cold northern winds from reaching it while, in summer, the heat is tempered by the meltemia, the soft, northwestern winds, and the sea breezes.  Due to the air currents prevalent many of the island beaches have developed into internationally acclaimed windsurfing centers.

It has been inhabited since Paleolithic times and has been through many invasions, and has received the influence of a variety of cultures.

It was part of the Byzantine Empire until 1204 when the Franks took over Constantinople it eventually ceded to the Venetians.

Corfu never fell under the Ottoman oppression due to the successive dominations of the Venetians, the French and the British over the centuries. Their culture wielded strong influence in the city: it was here that the first Greek University (the Ionian Academy), the first Philharmonic Orchestra and the First School of Fine Arts were founded.

Spianada is the largest square in the Balkans, with 19th-century remarkable works of French architecture. Here you can watch cricket games, or attend in musical concerts organized throughout the year.
Liston, the city’s trademark, where the aristocrats used to enjoy their evening promenades. The characteristic arcades form the most romantic background setting for a welcome cup of coffee at one of the town’s cozy cafés.

other city attractions with rich history are

The impressive 15th century Old Fortress, as well as the New Fortress.
The Saint Michael and George Palace at the northern part of Spianada,

a considerable number of churches. The most imposing one is the city’s Cathedral, tall bell tower the Church of St. Spyridon, the island’s patron Saint, whose relics are kept here. Four processions are held every year during which the body of Saint Spyridon is carried around the streets of the city (on Palm and Easter Sunday, on April 11th and the first Sunday in November). All the philharmonic bands of the city accompany the processions creating a remarkable awe-inspiring spectacle.

A world heritage site is the beautifully preserved Old Town of Corfu.

Palaces, fortresses, austere public buildings of the Venetian rule uniquely blend with tiny alleyways paved with cobblestones and small secluded squares. Strolling through a complex of narrow cobbled streets with stairways and vaulted passages, the so-called “kantounia”, will make you feel as if you’ve travelled to Genoa or Naples.

The old buildings’ trademark arches are particularly reminiscent of Venice.

Other Places of interest

Corfu’s’ history is full of battles and conquests.

Ruins of ancient Greek temples and other archaeological sites of the ancient city of Korkyra are found in Palaiopolis. Medieval castles punctuating strategic locations across the island are a legacy of struggles in the middle ages against invasions by pirates and the Ottomans. Two of these castles enclose its capital. From medieval times and into the 17th century, the island, having successfully repulsed the Ottomans during several sieges, was recognized as a bulwark of the European States against the Ottoman Empire and became one of the most fortified places in Europe. The fortifications of the island were used by the Venetians to defend against Ottoman intrusion.

The castles of Corfu, located at strategic points on the island helped defend the island from many invaders and they were instrumental in repulsing repeated Turkish invasions, making Corfu one of the few places in Greece never to be conquered by the Ottomans.

The Ionian Academy is the first academic institution of modern Greece. The building is now fully restored after the WWII Luftwaffe bombings. It was an institution that maintained the tradition of Greek education while the rest of Greece was still under Ottoman rule. The academy was established by the French during their administration of the French and became a university during the British administration in 1824.It has Philological, Law, and Medical Schools.

The Ionian University was established in 1984. It has three Schools and six Departments offering undergraduate and post-graduate degree programs and summer schools.

Corfu has a long musical, theatrical, and operatic tradition. The Nobile teatro di San Giacomo di Corfu was the first theatre and opera house of modern Greece and the place where the first Greek opera, was performed.

The most notable of Corfu’s museums and libraries are located in the city, and are:

On Good Friday, from the early afternoon onward, the bands of the three Philharmonic Societies, separated into squads, accompany the Epitaph processions of the city churches. Late in the afternoon, the squads come together to form one band in order to accompany the Epitaph processions of the cathedral, while the funeral marches

On Holy Saturday morning, the three city bands again take part in the Epitaph processions of St. Spyridon Cathedral in procession with the Saint’s relics. The litany is followed by the celebration of the “Early Resurrection”; balconies in the old city are decked in bright red cloth, and Corfiotes throw down large clay pots (the bótides, μπότηδες) full of water to smash on the street pavement, especially in wider areas of Liston and in an organized fashion.

This is enacted in anticipation of the Resurrection of Jesus, which is to be celebrated that same night,

Once the bótides commotion is over, the three bands parade the clay-strewn streets playing the famous “Graikoí” festive march. This legendary march, the anthem of the island, was composed during Venetian rule.

Corfu can be reached by ferry services and flying dolphins

By plane from Athens airport

With buses to the main places on the island which run about six times a day.

If you want to explore Corfu there is nothing stopping you…

Watch a video about Corfu 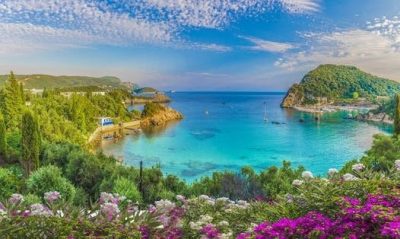