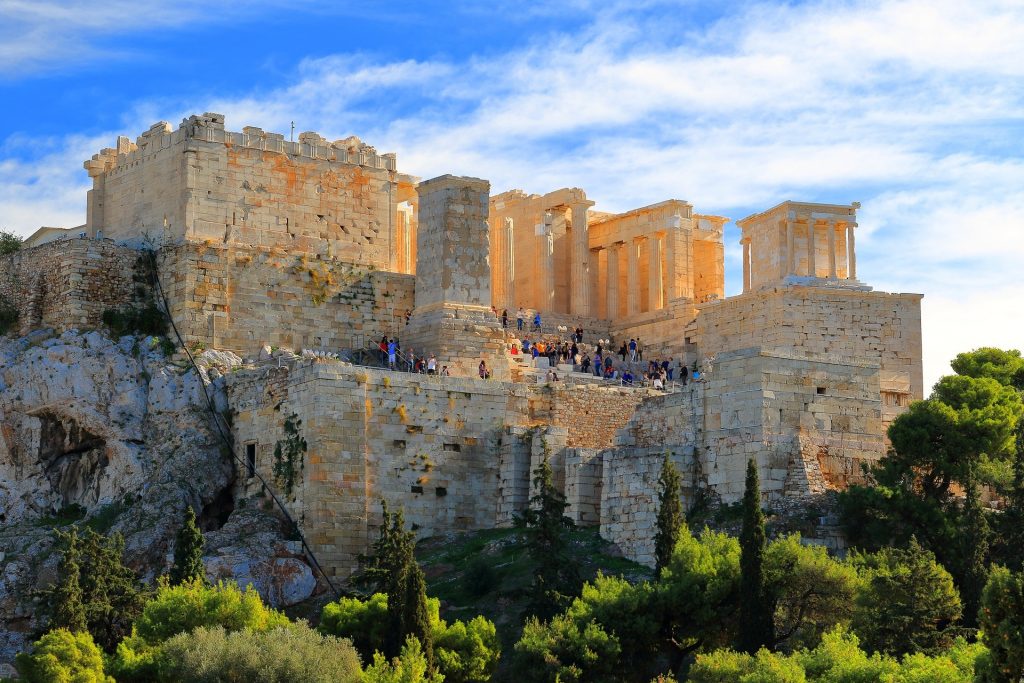 It also was the heart of Ancient Greece, a powerful civilization and an empire.

The city took its name from the Goddess Athena, goddess of wisdom, war, and protector of the city

There is nothing I can write that has not been written before. Athens is a place that has something for everyone. You can visit monuments, theaters, night life, botanical gardens, many shops and even a flea market in Monastiraki.

Its history dates back to the Neolithic age.

The city is dominated by 5th-century BC landmarks, including the Acropolis and the Parthenon temple. The Acropolis Museum, and the National Archaeological Museum, has many findings from that period like sculptures, vases, jewelry.

For those who like to walk and discover there are some roads, pedestrian-only, such as the winding lanes of the Plaka neighborhood, with cafes, traditional taverns and neoclassical houses. When there do not forget to eat Gyros and Souvlaki and try the Greek salad with tomatoes, cucumbers, olive oil and feta cheese called “choriatiki”.

When in Athens you will not know what to visit first. There is 6000 years of history in your every step. Among the few to mention is Acropolis with all its buildings and its museums, odeion of Herodes, Hadrian’s arch, Plaka, Cape Sounio with the Temple of Poseidon (5th c. B.C.), Lycabettus Hill with a view of the entire city all the way to the sea, Temple of Olympian Zeus, Philopappou hill, and the most ancient law court of the world Areios Pagos, ancient Agora.

Do not forget Syntagma square where you can see the Greek parliament building and in front of it the Monument of the Unknown Soldier, guarded by the Evzones in traditional costumes, guarding it, the old royal palace and next to it the National Gardens with the Zappeion mansion. There is also the famous Ermou Street were you can find from fashion to silver and handmade art and jewelry. At the end of this road is Monastiraki and its flea market. After that is Kerameikos the ancient city’s cemetery.

You must see the Panathenaikon stadium also called Kallimarmaro where the first Olympic Games were held in modern history (1896).

Visit Kolonaki, which is considered to be the most “aristocratic” area in the center of Athens. There you will find many shops selling expensive brands and high couture, modern restaurants, bars and cafés.

Kifissia is also worth a visit, with its beautiful villas and impressive mansions.

Athens has hotel accommodations are of high standard, modern means of transportation and a wide choice of opportunities for shopping, dining and nightlife. Discover Athens taverns, cafes, bars, and shops selling traditional Greek products and souvenirs. If you are looking for night life, visit Psyrri square with its many bars.

Athens is a city that intrigues every visitor, during all seasons.

Acropolis as an ancient site is a world heritage place and is protected.

The Acropolis of Athens is an ancient city / fort located on a flat rocky mountain 150m above sea level in the city of Athens. It is a collection of many ancient buildings. It has architectural and historic significance. The most famous building is Parthenon.

There is evidence that the hill was inhabited from the year 3000 BC.

In the fifth century Pericles supervised the construction of the site’s most important present remains.

Unfortunately due to the many wars Greece was involved in, the buildings were damaged seriously.

In 1975 Greece started its restoration to bring the buildings back to their previous glory.

Every four years, there is a festival called the Panathenea.

During the festival, a procession travels through the city to end at Acropolis.

Around every corner in modern Athens there is some story behind it, so explore Athens for your next trip.

Watch a video about Athens, Greece