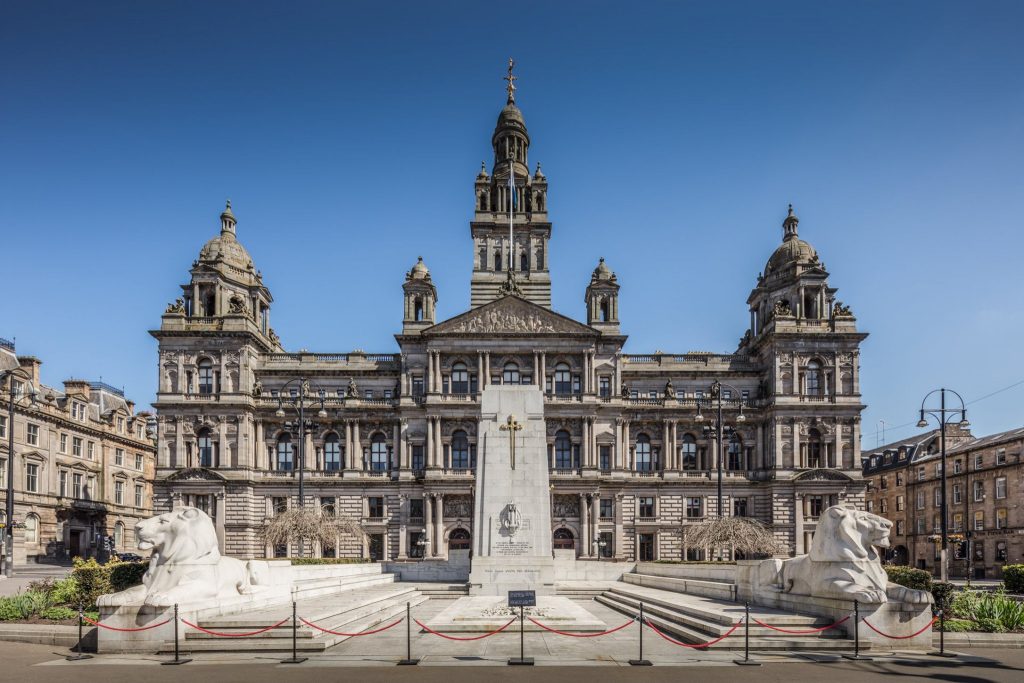 Visit Loch Lomond and climb the nearby Ben Lomond (the most southerly Munro) for great views. It is a 40-minute drive on the A82 road from the West End, and trains to Balloch (on the southern shore of the loch) leave Queen Street (Low Level) every half hour. Tarbet and Ardlui on the northern part of the loch are accessible via the West Highland Railway from Queen Street (High Level) several times a day; Citylink buses also serve the entire western side of the loch throughout the day.

Take a boat trip outside the city, either on a powerboat or on the Waverley (the last seagoing paddle steamer in the world). Both of these services go to many destinations throughout Scotland.

Take a seaplane trip to Loch Lomond, or even further afield.

Edinburgh, Scotland’s capital city, is 46 miles to the east of Glasgow and is easily reachable by public transport.

The historic city of Stirling lies 28 miles to the north east of Glasgow – best known as the spiritual home of Scottish national heroes William Wallace and Robert The Bruce. A natural gateway to the Central Highlands, the city’s famous castle is well worth a visit.

Ride the West Highland Railway from Queen Street to Oban, Fort William or Mallaig, perhaps the most scenic rail journey in the world.

Walk the West Highland Way from Milngavie (an upmarket suburb of Glasgow) all the way to Fort William. The scenery on the latter half of the walk is absolutely breathtaking and takes you through the heart of Glen Coe, generally regarded as one of the most beautiful areas of Scotland.

The Ayrshire coast towns of Largs, Ardrossan, Saltcoats, Troon, Prestwick and Ayr are typically old-fashioned holiday seaside resorts. Whilst most Glaswegians themselves have long abandoned them in favor of package holidays to the Mediterranean, they all have an individual charm of their own. South Ayrshire is the spiritual home to Scotland’s literary hero and national “bard”, Robert Burns. All are easily reachable via regular train services from Central Station.

Take a day-trip to the Isle of Arran. It is possible to obtain through train/ferry tickets to reach the island. The Isle of Arran is known as “Scotland in Miniature” due to the fact it contains many features of mainland Scotland in microcosm. Brodick Castle is home to beautiful gardens and has a path connecting to path up Goat Fell, the highest point on Arran which offers stunning views of Brodick Bay during the summer (The Castle is located at the north end of Brodick, student discount available). The island is also littered with sites of archaeological and historical interest including many circles of ancient standing stones. Take one of the circle island buses to see it all. Watch your time though – know the last bus and ferry of the day, especially in winter. There is a beautiful bay with a castle in the middle on the northeast in a village called Lochranza.

Take a day trip on the paddle steamer Waverley. You can catch the Waverley at the Broomielaw on the banks of the River Clyde, just a short walk from the city centre.

Owned by the National Trust for Scotland, Greenbank House and Gardens make for a pleasant day out in one of Glasgow‘s leafier suburbs. It’s a 30 minute walk from Clarkston railway station (catch the train from Central Station (High Level)). The gardens have proven to be an inspiration to gardeners throughout the world.

A short (30-40min) bus journey West-bound down the M8 towards Houston is a good day out. Houston is a traditional Scottish village steeped in history (and is nearby to both traditional leather tanning town Bridge-Of-Weir and upmarket Kilmacolm, home to many local celebrities), but its main draw is the Fox & Hounds Pub, home to Houston Brewing Company. You’d be amazed how many Glaswegians have made this same short journey to sample the ale and traditional Scottish beers of Houston! Several brews are available all year round, with seasonal specialties on tap depending on the month. Tours of the small but well respected brewing operation are available. This is one of Central Scotland’s most well regarded brewing communities, and well worth a trip. Houston is well served by two bus companies, but watch out as the service back into Glasgow is around 11PM.

Take a hike up the Kilpatrick Hills. Kilpatrick Station is only a 50 minute train journey from Queen Street Station (Low Level) on weekdays and Saturdays, and Central Station (Low Level) on Sundays. The hills are huge and from the highest peaks you can admire Greater Glasgow from a distance, with views as far as Edinburgh, Stirlingshire, Ayrshire and the Highlands on the clearest days. The hills have their own stunning forests, valleys, lakes, streams and waterfalls. If you lose your way a friendly local will always be happy to help.