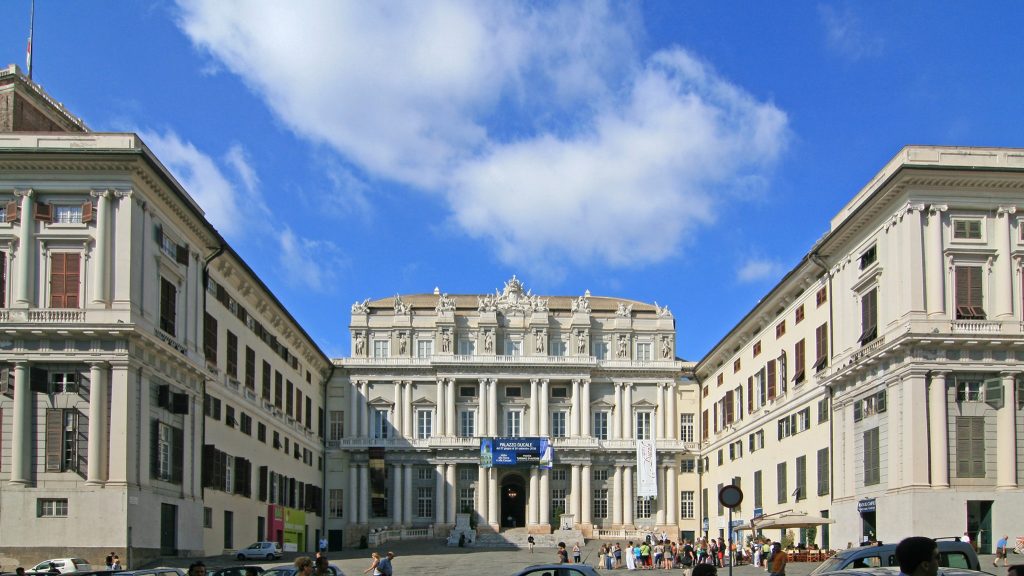 Explore Genova (or Genoa), a historical port city in northern Italy, the capital of the Region of Liguria. Genoa today, as a tourist attraction, is often shadowed by cities such as Rome or Venice, even though it has a long history as a rich and powerful trade centre. However, with its multitude of hidden gems behind cozy alleyways, excellent cuisine (notably fish and seafood), renovated old port, beautiful sights (including one of Europe’s biggest aquariums have made the birthplace of explorer Christopher Columbus an enticing place which is gradually becoming more included in the touristic market. With pastel-colored terracotta-roofed houses, artistic churches, lovely seaside villas, and also several luxurious boutiques, Genoa is a must see if you want to experience the “quintessential” Italy.

The busy city port, filled to the brim with yachts, boats, cruises, ferries and cargo ships. Genoa is a very important sea town in the Mediterranean.

Venice, Rome, Milan, and Florence are of course the most known and admired towns in Italy. When moving to north-western Italy (Milan, Turin) it is nevertheless absolutely worth staying for a couple of days or a weekend in Genoa. The city is a good base to explore the Italian Riviera and world famous places like Portofino and the Cinque Terre.

The city may be less known by major tourist operators, but its splendor is often hidden inside the narrow streets of the historical center, called “vicoli”.

Genoa is a sort of decayed glorious port town, whose decay, however, is what makes it so interesting and pretty. The facades of grand palaces are hidden in scruffy, yet enticing alleyways, and there are really curious treats for anyone in virtually every alley. The city is your “typical” Italian one – quite sunny (during summer), with Mediterranean-looking houses topped by grey slate roofs, filled to the brim with outdoor cafes and bars, with lots of tiny and quirky alleyways, elegant designer shops, and restaurants. Today, also, the old port has been renovated, and currently contains some funky avant-garde modern architecture, a delightful marina, and several seaside bars and shops.

Genoa has a classic Mediterranean climate that is heavily influenced by the sea leading to warmer winters and cooler summers than cities on the other side of the Lingurian Mountains and the Po Valley.

The Aeroporto di Genova – Cristoforo Colombo provides several daily flights from other major European cities such as Rome, London, Munich, Paris and Moscow and from Istanbul. From the airport it is fairly easy to rent a car or take a shuttle to the city center.

What to see. Best top attractions in Genova, Italy

Santa Maria di Castello, the cloister of the Dominican order, the museum and the summer cathedral offer a lot of treasures and exploring them is free during the opening hours of the church.

Genoa is known to have Europe’s biggest historical center. This is the heart of the old city. It’s made up of an incredible amount of tiny streets and alleys called Caruggi. Walking through it will plump you right back in ancient times when Genoa was the most important harbor of the Mediterranean sea. The city is generally safe, but caution is to be applied, especially at night time and in the more quiet zones toward Piazza Principe and the old harbor, due to presence of small criminality.

What to do in Genova, Italy

There are plenty of things to do in Genoa. A lot of young kids spend their time playing with their friends in public pools and share ice-creams in the summer time. There are a lot of paintings in the town and on the brick floors which a lot of people admire. Fishing for catfish is also a hobby most people have.

The vast majority of places charges service for a fixed amount per person (called coperto), as is custom in Italy. A trattoria, cafe or bar will not charge this fee for lunch, and this is often a good place to get pasta or a sandwich in the afternoon. Restaurants are open from approximately 12:30 – 3:00PM for lunch and 7:30 – 10:00PM for dinner.

Pesto sauce originates from the city of Genova. It is used in many dishes, including pastas and pizzas. You can always order from the huge variety of pastas and pizzas available here, but trying the one which is based on Pesto is a must to experience the traditional Genovese cuisine.

Another must try from the Genovese or Ligurian cuisine is the focaccia, which essentially is flat oven-baked Italian bread, which may be topped with onions, herbs, or other foodstuffs. They are quite tasty and often cheaper than pizzas. There are many ‘Focaccerias’ scattered throughout Genova and its surroundings. These are basically take away places, and easy on the wallet, too. In many of the focaccerias, you will find improvised varieties of focaccias, but usually, the best tasting ones come with only tomatoes or onions and a bit of olive oil. The original “focaccia” is simply topped with olive oil and salt.

Don’t miss to try the farinata, a thin crusty pie made with chick-peas flour, water, salt, and olive oil.

Piazza delle Erbe: small square in the old town, with nice bars (5 min. walking from Piazza De Ferrari and Palazzo Ducale) open until 1 AM. On Fridays and Saturdays the bars are open until 2 or 3 and it is crowded of young people until the morning.

In general the knowledge of the English language is good, and it is not difficult to find someone who can help you with easy touristic problems also in Spanish or French, but the best is of course to speak a little bit of Italian also due to the presence of a percentage of old people.

After you are done with your adventure to explore Genova, you should know that Genova makes a good base to explore Cinque Terre, Rapallo, Portofino, Portovenere, La Spezia, or Chiavari. Cities such as Turin (1.5-2hrs), Pisa (1.5hrs), Milan (1.5 hrs), Nice (3 hrs) are all easily accessible by train.

Watch a video about Genova