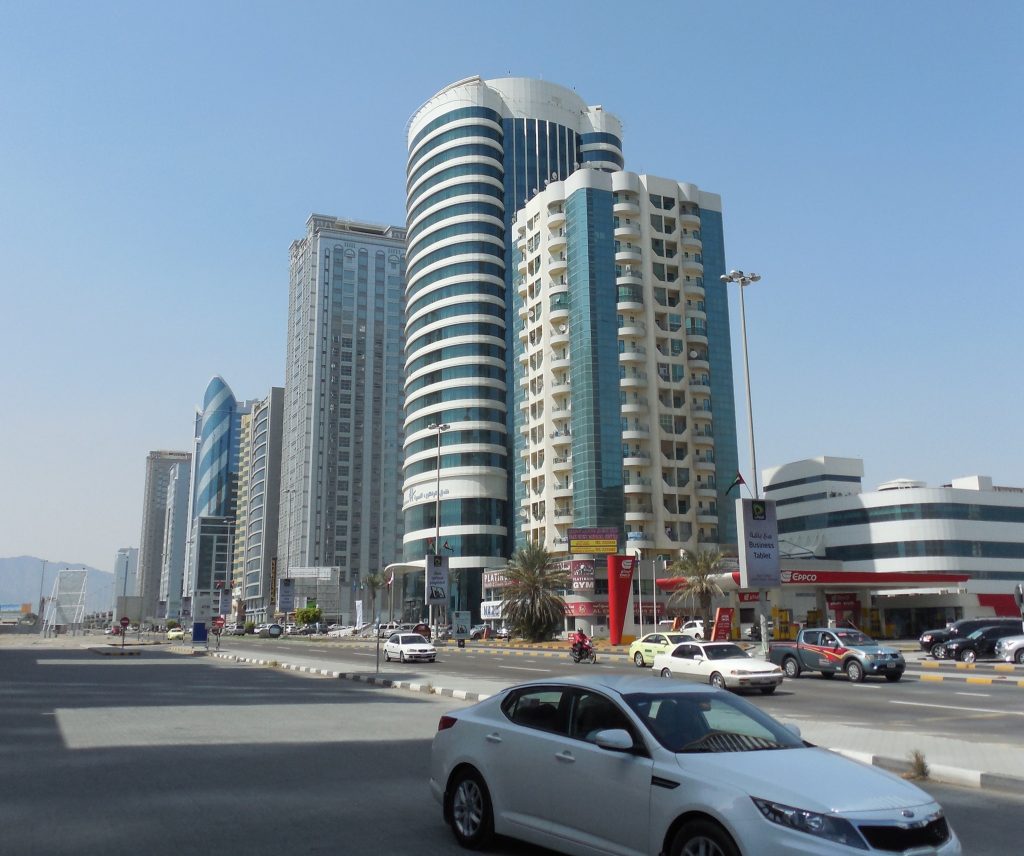 Archaeological finds in the emirate of Fujairah point to a history of human occupation and trading links stretching back at least 4,000 years, with Wadi Suq (2,000 to 1,300 BCE) burials located at Bithnah and the Qidfa’ Oasis. A third millennium BCE tower was used to construct the Portuguese fort at Bidiyah, identified with the Portuguese ‘Libedia’, a fortress recorded in de Resende’s 1646 map – the fortress itself has been carbon dated to 1450-1670.

Fujairah is also rich in late Islamic fortresses, as well as being home to the oldest mosque in use in the United Arab Emirates, Al Badiyah Mosque, which was built in 1446 of mud and bricks. It is similar to other mosques found in Yemen, eastern Oman, and Qatar. Al Bidyah Mosque has four domes (unlike the other similar mosques which have between seven and twelve) and lacks a minaret.

The emirate of Fujairah covers approximately 1,166 km2, or about 1.5% of the area of the UAE, and is the fifth-largest emirate in the UAE. Its population is around 225,360 inhabitants (in 2016); only the Emirate of Umm al-Quwain has fewer occupants.

The weather is seasonal, although it is warm most of the year. Tourist visitor numbers peak just before the school summer months.

Power is ultimately held by the ruler of Fujairah, His Highness Sheikh Hamad bin Mohammed Al Sharqi, who has been in power since the death of his father in 1975. The Sheikh supposedly makes money himself through his own business, and the government funds are used for social housing development and beautifying the city, although there is little distinction between the state and his personal wealth. The ruler can make any decisions regarding any aspect of law, although federal laws take precedence.

The Sheikh and his immediate family heads the cabinet of Fujairah, and a few members of respected local families make up the advisory committees. The Sheikh must ratify any decisions by the cabinet. After the ratification, such decisions may be enacted into law as Emiri decrees, which are usually effective immediately.

Fujairah’s economy is based on subsidies and federal government grants distributed by the government of Abu Dhabi (the seat of power in the UAE). Local industries consist of cement, stone crushing and mining. Resurgence in the construction activity helped the local industry. There is a flourishing free trade zone, mimicking the success of the Dubai Free Zone Authority which was established around Jebel Ali Port.

The federal government employs the majority of the native, local workforce, with few opening businesses of their own. Many of the locals work in the service sector. The Fujairah government prohibits foreigners from owning more than 49% of any business. The free zones have flourished, partly due to the relaxation of such prohibition within the zones, as full foreign ownership is allowed there. Shaikh Saleh Al Sharqi, younger brother to the ruler, is widely recognized as the driving force behind the commercialization of the economy.

Fujairah is a minor bunkering port with large scale shipping operations taking place every day. Shipping and ship related services are thriving businesses of the city. Due to the business friendly environment and ease of logistic support, ships trading from Persian Gulf anchor here for provisions, bunkers, repair and technical support, spares and stores before proceeding on long voyages. The city is also geographically well suited for such ship service related activities.

Government of Fujairah is a major shareholder in National Bank of Fujairah, an UAE local bank. Incorporated in 1982, the National Bank of Fujairah (NBF) is active in the areas of corporate and commercial banking, trade finance and treasury. NBF has also expanded portfolio to include personal banking options and Shariah-compliant services. NBF supports industries ranging from oil and shipping to services, manufacturing, construction, education and healthcare.

Foreigners or visitors are not allowed to buy land. Emirati nationals can purchase land from the government, after proving their nationality. If there is no suitable land available via the official government offices, private purchases can also be made, with the eventual price being determined by the market and the individuals themselves.

Among tourism projects is an $817m resort, Al-Fujairah Paradise, near Dibba Al-Fujairah, on the northern Omani border, next to Le Meridien Al Aqah Beach Resort. There will be around 1,000 five-star villas as well as hotels, and it is expected that all the construction work will be finished within two years.

The Sheikh is trying to improve opportunities for the local workforce, by trying to entice businesses to locate in Fujairah and diverting Federal funds to local companies in the form of development projects.

The Fujairah government has built clinics, known locally as “medical houses”. These clinics complement and help lighten the load on the main Fujairah Hospital by allowing walk-in appointments and providing ancillary medical services. These clinics have turned out to be a success, visited by the local populace.

Travel in and around Fujairah and the surrounding towns of Khor Fakkan, Kalba and Masafi has been made easy by the development of modern highways since independence in 1971. Highways are funded by the federal government directly, and contracts are tendered centrally. This is meant to safeguard the quality and delivery of the contracts and prevent corruption from damaging the construction.

The new Sheikh Khalifa Highway linking Dubai and Fujairah City was officially inaugurated on Saturday, December 4, 2011, following delays to the originally scheduled opening date of July 2011. It is a road that shortens the distance by 20 to 30 km. The Fujairah International Airport is near the city, with a large falcon statue at the airport roundabout. However, currently it only offers commercial service to Abu Dhabi, a domestic destination within the UAE.

The UAE culture mainly revolves around the religion of Islam and traditional Arab culture. The influence of Islamic and Arab culture on its architecture, music, attire, cuisine and lifestyle are very prominent as well. Five times every day, Muslims are called to prayer from the minarets of mosques which are scattered around the country. Since 2006, the weekend has been Friday-Saturday, as a compromise between Friday’s holiness to Muslims and the Western weekend of Saturday-Sunday.

Drinking alcohol is allowed at designated hotels, and at a few bars.

Groups of Emirati youths tend to socialize together on the streets and cafés or outside games arcades, cinemas and mini-malls. It is unusual to see mixed-sex groups due to gender segregation in Emirati society.

On vacations, many Fujairah residents travel to western emirates such as Dubai and Abu Dhabi, for entertainment and shopping purposes. They also visit the Wadis surrounding the emirate on camping and hiking trips. At the same time, other emirates’ residents visit Fujairah for relaxation purposes and to get away from the stifling heat of the desert. Watersports are becoming more and more popular amongst both locals and tourists. Examples of watersports are jet skis, windsurfing, waterskiing and diving. Professional diving instructors can be found in Le Meridien or in Royal Beach Hotel, where one can obtain an International Diving License, for a fee.

Despite its location, there is very little to see in Fujairah city. The city is a business centre first and foremost, with none of the enticing atmosphere of the other large cities of the UAE.

Of some interest is the fort, located just outside the city itself. The main structure is still undergoing renovations, but visitors may walk around the reasonably large site (for free). Compared to other forts in the UAE, though, Fujairah Fort is a poor cousin; however there is a museum too (closed on fridays). The heritage village is better than the one in Hatta and is open Sat-Thu 8am-6:30pm, Fri 2:30pm-6:30pm and the entrance fee.

In the centre of the city there is the Sheikh Zayed Mosque, the 2nd largest mosque in U.A.E. which opened recently.

Around 30 km north of Fujairah you can see the Al Badiyah mosque, the oldest mosque in UAE, which is small but you should definitely see it. You can travel there by bus or by taxi. On the way back you can stop by in Kor Fakkan, where you can find one of the most famous promenades in this area and also nice beaches

What to see. Best top attractions in Fujairah UAE

Fujairah city itself is most emphatically not designed for pedestrians, being dominated by main roads. Thankfully, taxis, which have been completely changed to a new fleet of Nissan Altimas and Toyota Camrys, are metered, and are plentiful. In fact, visitors attempting to walk around the city will attract horn tooting from taxi drivers, who seriously cannot believe that anyone would choose to walk.

The city of Diba which is 30km far from Fujairah city is a good choice, where you can enjoy the sunny beaches and you can practice any sea activity you like. One more interesting thing to do is that you can make a boat trip to one of many islands that lie in the Gulf of Oman, really wonderful places to visit and it is a good place for fishing. Fujairah is one of the best Scuba Diving spots in UAE, Diving in Fujairah is full of corals and marine life. There are also some small ship wrecks. Whether you are certified diver or just starting to learn you enjoy Fujairah waters on the Indian Ocean.

All things considered, Fujairah is probably more suited as a base from which to go on excursions to the surrounding areas (most of which are enclaves of Sharjah), rather than doing anything much else. The city is growing in stature as a business destination, particularly where oil is concerned, but tourism remains somehow significantly behind so if you want to explore Fujairah only it will be a short trip.

The local souk tends to sell products for residents (plants, spices etc) rather than tourist merchandise. A smaller souk is open along the Corniche in the evenings, but the main focus there is on generic goods – and copies of brand-name items.

For souvenirs, most top-level hotels have at least one gift shop with the customary array of items. Prices are not negotiable and tend to the higher end of the spectrum.

There are no local specialties as far as drink goes, which means that the usual collection of water, juices, tea, coffee and soft drinks are readily available.

Watch a video about Fujairah