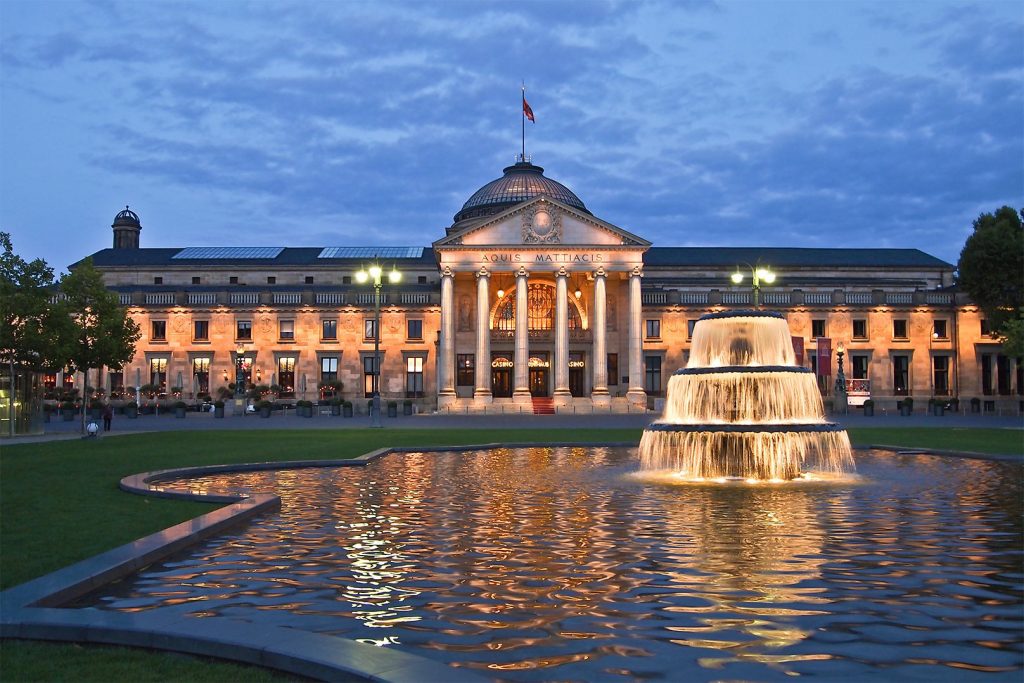 Explore Frankfurt which is the business and financial centre of Germany and the largest city in the German state of Hesse. The city is known for its futuristic skyline and the busiest German airport.

Located on the river Main, Frankfurt is the financial capital of Continental Europe and the transportation centre of Germany. Frankfurt is home of the European Central Bank and the German Stock Exchange. Furthermore, it hosts some of the world’s most important trade shows, such as the Frankfurt Auto Show and the Frankfurt Book Fair.

Frankfurt is a city of contrasts. Wealthy bankers, students and granola drop-outs coexist in a city that has some of the highest, most avant-garde skyscrapers of Europe next to well-maintained old buildings. The city centre, especially Römer square, the cultural landscape and the museums at the River Main, draw millions of tourists every year. On the other hand, many off the beaten track neighborhoods, such as Bockenheim, Bornheim, Nordend and Sachsenhausen, with their intact beautiful 19th century streets and parks are often overlooked by visitors.

Frankfurt is the place where Germany’s major autobahns and railways intersect. About 350,000 people commute to the city each day, in addition to the 710,000 people who actually live here. With a huge airport — the third-largest in Europe — it is the gateway to Germany and for many people also the first point of arrival in Europe. Further, it is a prime hub for interconnections within Europe and for intercontinental flights.

Frankfurt is the most diverse city in Germany and has the highest percentage of foreigners in the country: about 28% (710,000) of Frankfurt’s residents have no German passport and another 20% are naturalized German citizens.

Frankfurt is home to many museums, theatres and a world-class opera.

The best times for Frankfurt are late spring to early autumn. The summers tend to be sunny and warm around 25 °C (77° F). Be prepared, however, for very hot summer days around 35° C (95° F) as well as for light rain. The winters can be cold and rainy (usually not lower than -10 °C/14 °F). It rarely snows in Frankfurt itself.

If you intend to stay overnight, you may wish to avoid times when trade fairs are held, as this will make finding affordable accommodation a challenging task. The biggest are the Frankfurt Motor Show (Automobil-Ausstellung) every two years in mid-September and the Book Fair (Buchmesse) yearly in mid-October.

What to see. Best top attractions in Frankfurt, Germany

What to do in Frankfurt, Germany

In the summer, a walk along the river Main is a nice thing to do. A lot of people will spend a sunny afternoon walking or sitting there on a lawn or playing Frisbee or football. It’s a relatively quiet area, considering it’s in the heart of the city. Nearby cafes and restaurants allow you to have a drink in between. The only disadvantage is that it can be quite crowded when the weather is nice; try going during business hours on a weekday unless you’re looking for a crowd.

Maintower, Neue Mainzer Straße 52 – 58. Have a breathtaking view from this skyscraper.

Oper Frankfurt, Untermainanlage 11. Not to be confused with the historic Alte Oper building, this modern building is where to go to see an opera performance. State subsidized performances make this a relatively affordable place to see high quality productions.

Go for a walk in the City Forest (Stadtwald) in the south of Frankfurt. With about 48 square kilometers, it is regarded as the largest inner-city forest in Germany. Six playgrounds and nine ponds make the forest a popular tourist attraction.

Try the local cider “Apfelwein”, especially that made by Possmann. The “Frau Rauscher” edition has a pleasant natural taste with some yeast left into it.

The Cinestar Metropolis cinema shows a couple of movies in English.

Go swimming at Titus-Thermen or Rebstockbad. Both have whirlpools and sauna facilities. Or visit any of the other public indoor or outdoor pools in Frankfurt . Some of the bigger complexes outside the city limits include Taunus-Therme in Bad Homburg and Rhein-Main-Therme in Hofheim.

Go on top of the Feldberg Mountain, the highest mountain of the Taunus. Get on top of the observation tower at the Feldberg. If it’s cold, have a hot chocolate with cream (Heiße Schokolade mit Sahne) at the tower’s kiosk.

Frankfurt’s trade fairs are known to have taken place as early as in the year 1160. The Messe Frankfurt is one of the world’s largest exhibition centers, hosting a continuous stream of exhibitions small, large and gargantuan — the Motor Show draws almost a million visitors. Most fairs are open to the public for at least part of the time, and can be a fascinating if somewhat overwhelming experience if you’re interested in the theme. The Messe has its own train station, Messe, two stops away from the Central Railway Station. Advance tickets for fairs often allow free use of all RMV public transport. U4/U5 to station Messe/Torhaus; trains to the trade fairs will be announced in English.

Frankfurt Book Fair (Frankfurt Buchmesse). The largest event of the world’s publishing industry, held yearly in mid-October. The Frankfurt Book Fair has a long history, first being held in the year 1485, shortly after Gutenberg’s printing press in nearby Mainz made books much more easily available than before. The last two days (Sa-Su) are open to the general public, with book sales allowed on Sunday only. In recent years, the public days of the Book Fair have also drawn a vast contingent of manga/anime fans, many of whom dress up as their favorite characters! Photography is allowed, but only after asking permission.

Frankfurt Motor Show (Internationale Automobil-Ausstellung). The world’s largest motor show and Frankfurt’s biggest event, held every two years, next on Sept. 2019. (In even-numbered years, the show is held in Hannover.)

Frankfurt is a great place for shopping, as it caters both to tourists and to the local population, so you can find anything from haute couture to ridiculously cheap, and most of the shopping possibilities are located in the centre. The majority of shops are open until 8PM, though some of the larger city centre shops may close at 9 or 10PM. In general, shops are closed on Sundays.

The Zeil is the main shopping street in Frankfurt and in fact one of the most frequented shopping streets in Europe. The area features department stores such as Galeria Kaufhof and Karstadt, shopping complexes like the Zeilgalerie and MyZeil (remarkable architecture!), and many other shops. Also check out some of the surrounding streets, e.g. Liebfrauenstraße, Schillerstraße, Kaiserstrasse. Head to the Goethestraße for upscale shopping.

Kleinmarkthalle: market hall with local and international food products, located at Hasengasse 5-7 (in the city center between Zeil and Berliner Straße)

NordWestZentrum: a large modern shopping mall in the north of Frankfurt. Many of the shops there can also be found in the central Zeil area.

Flea Market: Saturdays along the river in Sachsenhausen. Starts at around 10:00 and goes on until 14:00 during which time the road is normally closed to traffic.

There are of course restaurants all over Frankfurt. One notable area for dining may be what is locally known as the Fressgass (a literal translation would be “munching alley”). The correct name of this street is Grosse Bockenheimer Strasse. As the nickname implies, the Fressgass features many cafes, restaurant, and deli food stores. It’s a popular area to dine after the daily shopping. Take the subway to station Hauptwache or Alte Oper. In late May to early June (exact dates vary each year), the Fressgass Fest takes place with food stands, cheap beer and live music.

Frankfurt is a young city where socializing and parties are always high on the agenda. Sachsenhausen, Bockenheim, Bornheim, Nordend and the city centre are the main areas of action. The city center includes the rather seedy red light district -which is heavily patrolled by police and local council officials – near the main station. Strip clubs like the Golden Gate Frankfurt are popular for e.g. bachelor/bachelorette parties at the weekend and similar joints are in walking distance. Check pricing upfront to avoid problems with bouncers afterwards.

Due to the banks and business travellers the nightlife in Frankfurt is split into upmarket parties or alternative student parties. Generally clothing must be a bit more upmarket than the German average — sneakers may not be acceptable in some venues.

While high-profile clubs are usually open until morning hours, bars close at around 23:00-01:00 and small clubs at 03:00-04:00 during Saturday nights. Best bet for binging all-nighters is Alt-Sachsenhausen as a lot of bars there will stay open until sunrise.

Alt-Sachsenhausen, a part of the suburb Sachsenhausen south of the Main river, is famous for its bars and Kneipen (a German type of Bar) serving the “regional speciality” Ebbelwoi (local dialect for “apple wine”, sometimes spelled Ebbelwei). However, these days it’s mostly for tourists. Good options in Alt-Sachsenhausen are Dauth-Schneider, Struwwelpeter and Lorsbacher Thal. Another option in Sachsenhausen is along Textorstrasse, a two minute walk south, where you can still find a row of authentic places catering to locals (Germania, Kanonensteppel, Feuerraedchen).

Not as famous as “Alt-Sachs”, but also well known, is Bornheim (located in the north) which has also some beer-garden-like cider establishments on ‘Berger Straße’ and the surrounding area. Some of the popular apple-wine places in Bornheim are Solzer, Zur Sonne and Zur Schoenen Muellerin.

There are many clubs in Frankfurt that cater to business people and organize corporate events.

There are a number of Internet cafes in Frankfurt of varying prices and quality.

Free Wi-Fi at coffee shops are more and more common but most businesses require some purchases of food etc. to get the code. Various other hotels offer Internet access but usually at a charge.

Mainz — Gutenberg’s home on the Rhine, with a well-preserved old city, 45 min.

Rüdesheim am Rhein – at the southern end of the Rhine Valley and the Rheingau, 73 min.

Cologne, home to the Cologne Carnival and a famous cathedral, 1 hour

If you’re keen on hiking, head out to the nearby Taunus mountains, the Vogelsberg (an extinct volcano), or the Odenwald. Explore Frankfurt and you will discover that there is something for every traveller’s taste.

Watch a video about Frankfurt