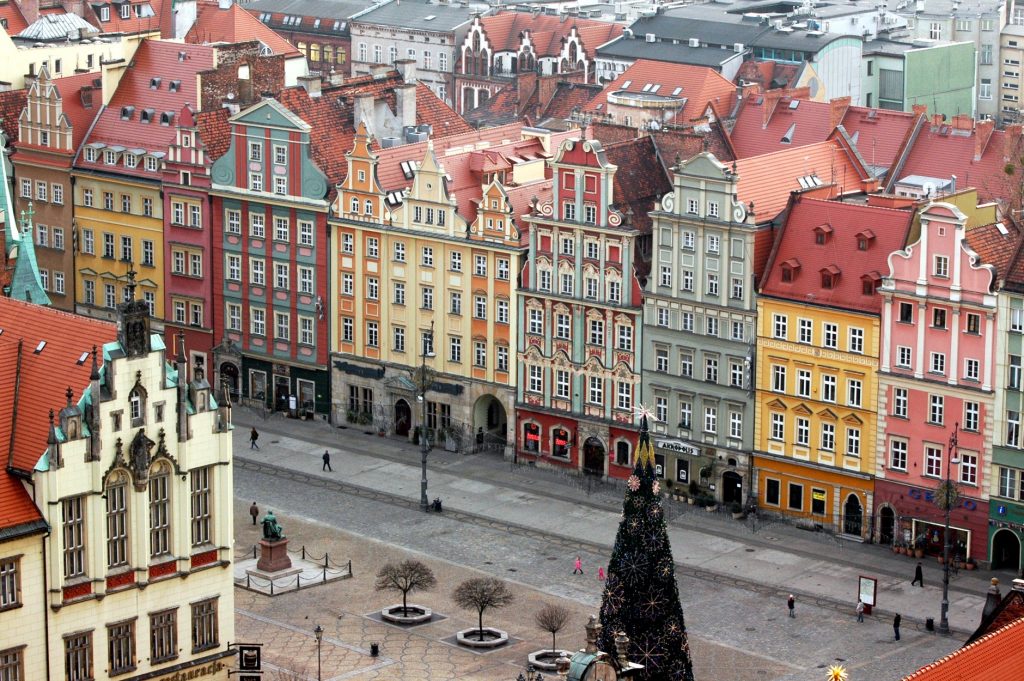 What to see in Poland

Ever since Poland joined the European Union, international travelers have rapidly rediscovered the country’s rich cultural heritage, stunning historic sites and just gorgeous array of landscapes. Whether you’re looking for architecture, urban vibes or a taste of the past: Poland’s bustling cities and towns offer something for everyone. If you’d rather get away from the crowds and enjoy nature, the country’s vast natural areas provide anything from dense forests, high peaks and lush hills to beaches and lake reserves.

Most of the major cities boast lovely old centers and a range of splendid buildings, some of them World Heritage sites. Many old quarters were heavily damaged or even destroyed in WWII bombings, but were meticulously rebuilt after the war, using the original bricks and ornaments where possible. Although remains of the Soviet Union and even scars of the Second World War are visible in most of them, the Polish cities offer great historic sightseeing while at the same time they have become modern, lively places. The capital, Warsaw, has one of the best historical centers in Central Europe; its meticulously reconstructed Old Town (Stare Miasto) includes ancient city walls, royal palaces, churches, and scenic market squares. You can follow the Royal Route to see some of the best landmarks outside the old centre. Alternatively, you can explore Warsaw’s Śródmieście district, a collection of ultra-modern high-rises and fashionable streets mixed with reminders of the Stalinist past. Even further, cross the Vistula to the city’s east bank and explore trendy Praga, Warsaw’s equivalent to London’s Camden Town or New York’s Brooklyn, known in the past for its working-class roots yet now is an epicenter of Polish hipsterdom. To the south, the old city of Kraków, ancient and grand, is largely considered the country’s cultural capital, with another gorgeous historic centre, countless monumental buildings, and a slew of excellent museums to choose from. Just 50 km from there is the humbling Auschwitz concentration camp which, due to the horrible events it represents, leaves an impression like no other World Heritage Site does. The ancient Wieliczka Salt Mine, also a World Heritage Site, is another great day trip from Kraków.

The provincial capital of Poznań is an underestimated city, but definitely worth a visit. With the oldest cathedral in the country and also the second biggest necropolis in the country for kings and rulers, a beautiful Renaissance town hall with two battling billy goats (seen only around noon), and an impressive 20th century imperial palace built for the German kaiser (just to mention a few attractions) makes a great impression on most visitors.

Once a Hanseatic League town, the port city of Gdańsk boasts many impressive buildings from that time. Here too, a walk along the Royal Road gives a great overview of notable sights. The urban layout of Szczecin, the second biggest city of whole Pomerania, is a unique composition of buildings, parks and riverside areas on the Oder river. Szczecin is a capital of West Pomerania region with stylish Pomeranian Dukes’ Castle. Wrocław, the capital of Lower Silesia, is still less well-known but can definitely compete when it comes to amazing architecture; its Centennial Hall being the prime example. The city’s picturesque location on the Oder and countless bridges make this huge city a lovely place. The old town of Zamość was planned after Italian theories of the “ideal town” and named “a unique example of a Renaissance town in Central Europe” by UNESCO. The stunning medieval city of Toruń has some great and original Gothic architecture, as it is one of the few Polish cities to have completely escaped devastation in WWII. The city of Lublin additionally boasts an impressive historic old town, castle, and serene surrounding countryside.

With 23 national parks and a number of landscape parks spread all over the country, natural attractions are never too far away. Białowieża National Park, on the Belarus border, is a World Heritage Site as it comprises the last remains of the primeval forest that once covered most of Europe. It’s the only place where European bison still live in the wild. If you’re fit and up for adventure, take the dangerous Eagle’s Path (Orla Perć) in the Tatra Mountains, where you’ll also find Rysy, Poland’s highest peak. Pieniński National Park boasts the stunning Dunajec River Gorge and Karkonoski National Park is home to some fabulous waterfalls. The mountainous Bieszczady National Park has great hiking opportunities and lots of wildlife. Wielkopolska National Park is, in contrast, very flat and covers a good part of the pretty Poznań Lakeland. The Masurian Landscape Park, in the Masurian Lake District, with its 2000 lakes, is at least as beautiful. Bory Tucholskie National Park has the largest woodland in the country and has many lakes too, making it great for birdwatching. The two national parks on Poland’s coast are also quite popular: Wolin National Park is located on an island in the north-west, and Słowiński National Park holds some of the largest sand dunes in Europe.

The Polish countryside is lovely and at times even gorgeous, with countless historic villages, castles, churches and other monuments. Agrotourism is therefore increasingly popular. If you have a taste for cultural heritage, the south western parts of the country offer some of the best sights, but there’s great stuff in other areas too. The impressive Gothic Wawel Castle in Krakow may be one of the finest examples when it comes to Poland’s castles, but most of the others are located in smaller countryside towns. The large, red brick Malbork castle (in northern Poland) is perhaps the most stunning one in the country, built in 1406 and today the world’s biggest brick Gothic castle. The castle of Książ, near Wałbrzych is one the best examples in Lower Silesia, along with the atmospheric, semi-ruined Chojnik Castle, perched atop a steep hill near Jelenia Góra and within Karkonoski National Park. After surviving battles and attacks for centuries, it was destroyed by lightning in 1675 and has been a popular tourist attraction since the 18th century. The picturesque Czocha Castle near Lubań originates from 1329. A bit off the beaten track are the ruins of Krzyżtopór Castle, in a village near Opatow. There are a few Pomeranian Dukes’ Castles – in Szczecin, Darłowo and Słupsk. The Wooden Churches of Southern Lesser Poland are listed by UNESCO as World Heritage sites, just like the Churches of Peace in Jawor and Świdnica. The Jasna Góra Monastery in Częstochowa and the beautiful, World Heritage listed Kalwaria Zebrzydowska park are famous pilgrimage destinations. The lovely Muskau Park in Łęknica, on the German border, has fabulous English gardens and is a UNESCO site shared with Germany.