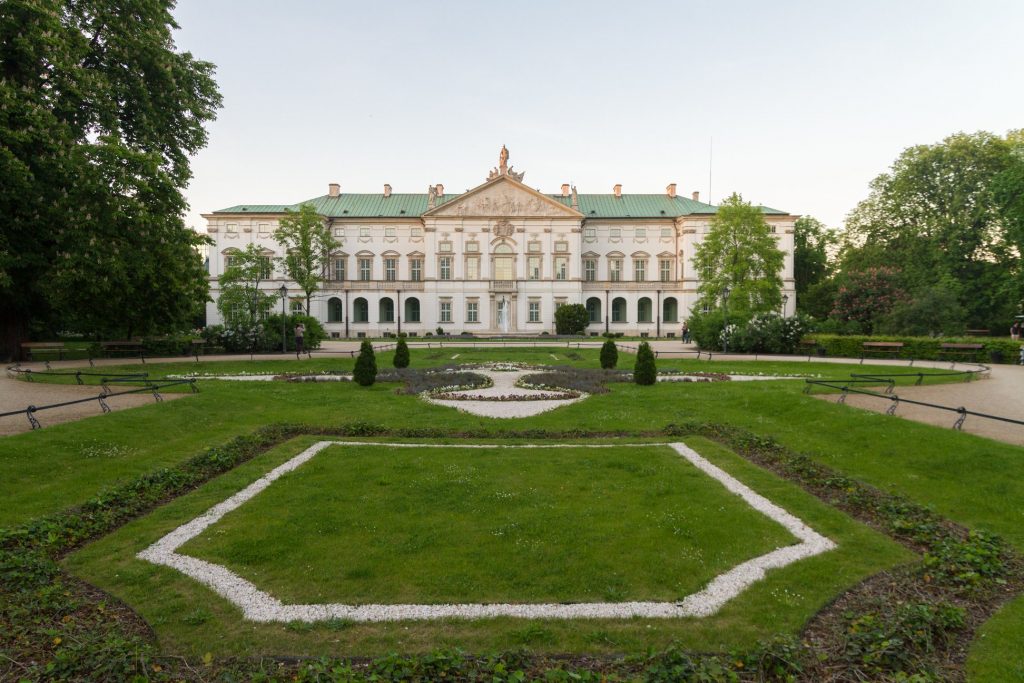 Warsaw is the capital and largest city of Poland, with 1.7 million inhabitants. It is located on the Vistula River (Polish: Wisła), roughly equidistant (350 km, 217 mi) from both the Baltic Sea (Bałtyk) in the north and the Carpathian Mountains (Karpaty) in the south.

The medieval capital of Poland was the southern city of Krakow, but Warsaw has been the capital of the country since 1596, and has grown to become Poland’s largest city and the nation’s urban and commercial center. Completely destroyed by the Nazis during World War II, the city lifted itself from the ashes. Today, almost every building in Warsaw dates to the postwar era — with what little remains of the old structures being confined largely to the restored districts of Stare Miasto (the ‘old city’) and Nowe Miasto (‘new city’), as well as selected monuments and cemeteries, plus midwar modernist districts Ochota and Żoliborz.

The Warsaw Convention Bureau is the official tourist information agency in Warsaw and can provide visitors with information regarding hotels, attractions, and events. They also have maps for travelers. Unfortunately, the bureau’s website isn’t well designed and doesn’t provide all that great of information, though, it can be helpful. They operate three locations in Warsaw.

Historically, the right bank was the first one to become populated, during the 9th or 10th century. However, the present city’s central district, called Śródmieście lies on the left bank. The Old Town is fully contained within the borders of the city center.

The central point of the city is located at the intersection of Al. Jerozolimskie and ul. Marszałkowska, near the entrance to the Metro Centrum subway station. It is good to know that the Palace of Culture is a landmark visible from almost any location in Warsaw. Should you ever get lost in the city, just walk toward the Palace of Culture and Science.

Warsaw (all airports code: WRW) is served by a total of two airports: Chopin Airport (also known as ‘Okecie’) for major airlines. Modlin Airport was opened in July 2012 and it handles the low cost traffic. Łódź Airport is also conveniently accessible from Warsaw.

What to see. Best top attractions in Warsaw

Most of the major sightseeing attractions are located in Centrum area, which encompasses seven districts, however, the most important district for sight-seeing is likely to be considered Śródmieście. The other districts all have something else to offer too, but the further from Centrum you journey, the less likely you’re to find much of anything that is of any major interest, although Wilanów’s palace and Kabaty forest are interesting enough.

The Royal Road (Trakt Królewski) was originally a track linking the Royal Castle to the Royal Palace in Wilanów (Pałac Królewski w Wilanowie), some 10 km farther. There are many points of interest along the route, and there’s a Poster Museum (Muzeum Plakatu) in Wilanów as well.

Warsaw Uprising Museum. An Interactive museum that documents the historic struggle of the Poles during WWII. The Uprising should have lasted only 3 days but lasted more than 2 months. The brief 3-D film that simulates flying over the destroyed city is powerful.

Museum of Modern Art in Warsaw – located on Vistula bank the Museum invites to step into the world of contemporary art by Polish and international artists.

The National Museum in Warsaw is home to over 800,000 exhibits of both Polish and worldwide art. They represent all epochs from antiquity to contemporary times, including paintings, sculptures, drawings, illustrations, photographs, numismatic items and objects of applied arts.

The unique the Faras Gallery presents the only permanent European display of artifacts of the Nubian culture and art from the early-Christian period, the Medieval Art Gallery houses unique sculptures, panel paintings and artefacts from all regions historically related to Poland, the Gallery of the 20th and 21st Century presents paintings, sculptures and drawings from 20-30’s and works of film, photography, performance from the last 40 years. The visitors can also see the Poland’s largest painting “The Battle of Grunwald” by Jan Matejko (426 x 987 cm).

Especially cherished exhibits are paintings reclaimed after being stolen from the National Museum in Warsaw during World War II including; “Jewish Woman Selling Oranges” by Aleksander Gierymski and “The Negress” by Anna Bilińska.

POLIN (Muzeum Historii Żydów Polskich) Museum of the History of Polish Jews was opened in 2013. This highly interactive museum is situated in a modernist building created by award-winning Finnish architects on the site of the former Jewish ghetto. A gem of the collection is the thoroughly restored interior of the 17th-century wooden sinagogue in Gwoździec (former Polish territory, now the western part of Ukraine). Allow at least a couple of hours to see the whole permanent exhibition.

What to do in Warsaw

Go on a Tour of Warsaw – the Old Town and surrounding districts are sufficiently compact to allow a number of excellent walking tours through its history-filled streets. You’ll see amazing things you would otherwise miss. Details are usually available from the reception desks of hostels and hotels.

Explore old Praga to get more shady (but safe) insight into old Warsaw. Find charming art cafes and galleries hidden around Ząbkowska, Targowa, Wileńska, 11 listopada, Inżynierska streets. In night, there are lot of vibrating clubs on these streets.

Copernicus Science Center. Copernicus Science Centre conducts modern science communication through interactive exhibitions addressed to different groups of recipients (adults, adolescents and children), shows and workshops on scientific themes, debates and discussions as well as activities from the borderland of science and art. The mission of the Centre is to inspire curiosity, assist the independent discovering of the world, help to learn and inspire social dialogue on science. It is one of the largest and most modern institutions of this type in Europe.

Warsaw is home to several professional musical and play companies. Being the capital city means the Polish National Opera and the Warsaw Philharmonic (also, National Philharmonic) call Warsaw home. There are a number of other companies, including play companies and theaters that will likely be of interest to travellers.

Noc Muzeów (Long Night of Museums). Noc Muzeów is a fun night that sees thousands of people turn out to spend the night wandering around Varsovian museums and galleries for free. It’s a great opportunity to wander around with your date of friends, as many people do, and grab an ice cream cone from one of the many cafes that stay open late. Most museums and galleries will stay open past midnight. Noc Muzeów usually occurs around mid-May.

Five Flavors Film Festival (Festiwal Filmowy Pięć Smaków). Five Flavors Film Festival is a yearly survey of the cinema from South and Southeast Asia, bringing premiere screenings of the newest, carefully selected titles from the region to the Polish audiences, along with classics from the Asian archives, profiles of chosen filmmakers, and national cinema retrospectives.

Warsaw is generally a safe city. The city center has a strong police presence and is generally a very safe area. The Praga districts are reputed to be dangerous, but this is generally more hype than reality. Of course, it would be wise to exercise a little extra caution if you’re in an area you do not know well. The bus and rail stations can be a magnet for homeless and drunkards, who, for the most part, will leave you alone.

Violent behavior is very rare and if it occurs it is most likely alcohol-related and at night. While pubs and clubs are generally very safe, the nearby streets may be scenes of brawls, especially late at night. Try to avoid confrontations. Women and girls are generally less likely to be confronted or harassed since the Polish code of conduct strictly prohibits any type of violence (physical or verbal) against women.

Pickpockets can sometimes be a problem and you should be careful to hold onto your belongings when in a large crowd or on buses.

Places near Warsaw to visit

Kampinos Forest (~15 km, take the 708 bus) – A wild and beautiful primeval forest, often called the green lungs of Warsaw, and an ideal choice for a day off from the noise of the city. There is Kampinos Forest, Biosphere Reserve in the vicinity of the capital. If you are seeking peace, you will probably find it there.

Konstancin-Jeziorna (~20 km, take the 700 bus) – A spa town with a spacious park is famous for its clean air and high housing prices.

Radziejowice (~40 km)- Jozef Chelmonski lived in modest manor house with a piece of farmland. He spent last twenty-five years of his life in rural Mazovia. Nowadays, in the chambers of neoclassical palace you can see many of Chelmonski works. They are so epic because he was painting with a great sense of color, He successfully replicated the natural beauty of that region. Bonfire among the nostalgic Mazovia scenery will be an interesting experience. Plains wide and flat as a table, small patches of forests are characteristic features of landscape.

Krakow (~300 km, in just under 3 hours by hourly IC/Ex trains) – The former capital of Poland, this was the European City of Culture in 2000.

Lublin (~200 km) – A medieval city with a well preserved old town, it is now the largest city and main tourist attraction in eastern Poland.

Kazimierz Dolny (~150 km, less than two hours by TLK train to Puławy, then half an hour by bus) – A Renaissance town with a picturesque marketplace, it is a hub for painters and Boheme.

Watch a video about Warsaw