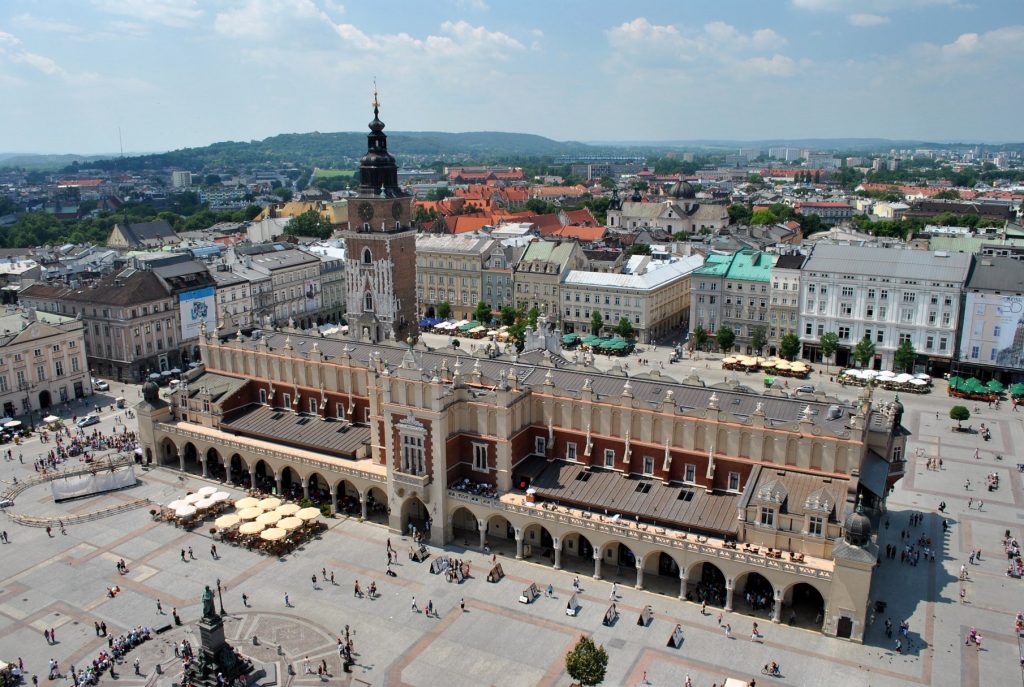 Auschwitz-Birkenau Former German Nazi camp 2km outside city of Oświęcim, 65km from Krakow. Leave a whole day for this if you want to visit. The Auschwitz camp and the much bigger Birkenau camp are a few kilometres apart, connected by a free shuttle that runs every 10 minutes. Frequent and inexpensive buses leave from the main bus station in Krakow (12 PLN one way). Trains leave approximately every two hours from the adjacent railway station (12 PLN one way). Most will let you out at the main Oświęcim station, a short walk from the camp (follow the signs to “Muzeum”). Alternately, a frequent PKS bus drops off and picks up directly in front of the Auschwitz visitor center — just check for destination “Oświęcim Muzeum.” This bus service is operated by Lajkonik, and you buy the ticket from the bus driver (14 PLN one way). You can find bus schedules here (the latest small bus returns at 17:52, the latest big bus at 19:45) and trains here. From Auschwitz, there is a free shuttle to Birkenau.

Tours and guides: There is no need to pay for overpriced organized tours from Krakow, which are heavily advertised even by the official Tourist agency for Krakow, but you can book guided tours at the official site here. You may only save around 20-40 zloty (PLN) going to Auschwitz/Birkenau on your own, but you won’t need to leave at 0600 or 0700 as many organized tours do – you will have plenty of time for a tour of both sites if you leave Krakow by 1000. Travel to Auschwitz using local trains or buses is easy and inexpensive (see above). Entrance is free of charge during the low season (1 Nov-31 Mar), but from 1 Apr-31 Oct, you may only enter between the peak hours of 10:00-15:00 with a guided tour (60 PLN). The rest of the day, entry is free and you may walk around and study the exhibits at your own pace. Tours may be joined at the site without prior reservation (English language tours run every 30 minutes between 10:30-15:30). However, be warned that tours may fill up and you would need to wait for the next one. The best approach is to check the schedule on auschwitz.org first and optionally book your ticket there as well. Check the schedule here. If you do want an organized tour from Krakow (which generally includes a bus there and a guide once there), they cost c. PLN130 per person. Many hotels and travel agents in Krakow, as well as the Galicja Museum in Kazimierz can direct you to reputable companies. Note: Depending on which agency you go with, prices can be around PLN80 per person with a cheaper price for students. If you go on your own, also be aware that you will want to bring a lunch and some water, BUT the Auschwitz and Birkenau sites do not let you enter with a regular-size backpack. For 5 zloty (PLN) you can leave your backpack or other bag at a luggage counter for the day. This also means you have to plan when you will eat lunch/drink water as you won’t be carrying it with you. Alternately, there are vending machines and a restaurant with hot food at Auschwitz. There is a pay toilet in the same building. The Birkenau site is completely in the open, so make sure you have sun protection and something warm to put on, for cooler/breezy days. Also make sure your guide takes your group up to the viewing platform at the Birkenau main building. The view is excellent but you can only go up with a guide, so make sure to ask before your tour ends.

Zalipie village: 100 km from Krakow, Zalipie is a peaceful agricultural village, but it’s very unique because of colorful flower paintings all over the walls of wooden houses, fences, wells… make you feel like in a fairy tale. There is no public bus or tour from Krakow to Zalipie because it is not realy a tourist site, but rather, a normal working village with large fields and seems no one speaks english. The best way to come here is renting a car from local tour agencies with english speaking driver who know the village well to take you to tourist attrations (church, community house, museum and painted houses. Poland-active agency offers an 8 seat bus with english speaking driver to visit Zalipie in half day (6 hours) for approximately 100 euros.(www.poland-active.com phone 0048668644310. address.ul.Mikolajska 5, Krakow 31-027)

Wieliczka is a town known for its ancient salt mines, now a museum. 17km from Kraków. One of the original 12 UNESCO World Heritage Sites and a definite must-see. Entrance to the mines (84PLN plus 10PLN for clicking photographs, 64 PLN for students – as of September 2016) is rather expensive compared to other tourist attractions in Poland, but it includes a live guide leading the group (different timetables for different languages, until 19:00). The train from Krakow GL (central train station) is by far the easiest way to visit the mine. You can buy a ticket on the train for 3 PLN (one way). The salt mine stop is the last stop on the train line to Wieliczka and then it is a short 2-block walk from the train station to the salt mine. Bus 304 (PLN4) makes frequent trips to and from the mines. There are 4 Wieliczka stops; get off at Wieliczka Kopalnia Soli (look for a giant “SALT MINES” sign). 40 minutes. There are regular minivans which ply from main train station to Wieliczka salt mine stop (same stop where Bus 304 stops). They are very convenient and frequent. One just needs to flag and the minivan will stop. Try to take a minivan which is not already full, so that you will get a seat. Minivan charges 3.50PLN per person for a trip from main train station to salt mine stop. Be aware that in Wieliczka there is more than one salt mine tour. You want the one that walks through the old salt mine and visits the underground cathedral, not the one that talks about how mining was actually done. There is also a “Graduation Bridge” tourist site in Wieliczka, a short walk through a nice city park from the entrance to the salt mine. It is often featured on the back of the salt mine ticket, but unfortunately, it costs extra to visit it.

Katowice — The capital of neighboring Silesia, Katowice is just an hour away with frequent and cheap bus service from Unibus (one-way costing 14zl, or $3.50) leaving every 15 minutes from the bus station under Galeria Krakowska. The prices in Katowice are much cheaper than Krakow, for example a beer at a pub on the pedestrian street Mariacka costing 5zl ($1.25) instead of 10zl throughout Krakow.

Tarnów — The second largest city in region with a beautiful main market.

Zakopane — 100km south in the Tatra Mountains is considered to be the Polish winter sport capital. Other winter sport centres near Krakow in the Beskids are Szczyrk, Żywiec, Zawoja, Korbielow, Bukowina Tatrzanska, Bialka Tatrzanska, Rabka, Szczawnica, Wisla, Koniakow and Ustron.

Częstochowa – 120km northeast is the most important pilgrim’s place in Central Europe. It’s worth to see other religious places on the way hermitage in Czatachowa or Żarki sanctuary.

Monasteries near Krakow are in Tyniec, Alwernia and Kalwaria Zebrzydowska.

Marvelous castle and a romantic park in Pszczyna

Spend a romantic night in a nineteenth hunting castle in Promnice surrounded by a dense forest and situated just by the Paprocany Lake.