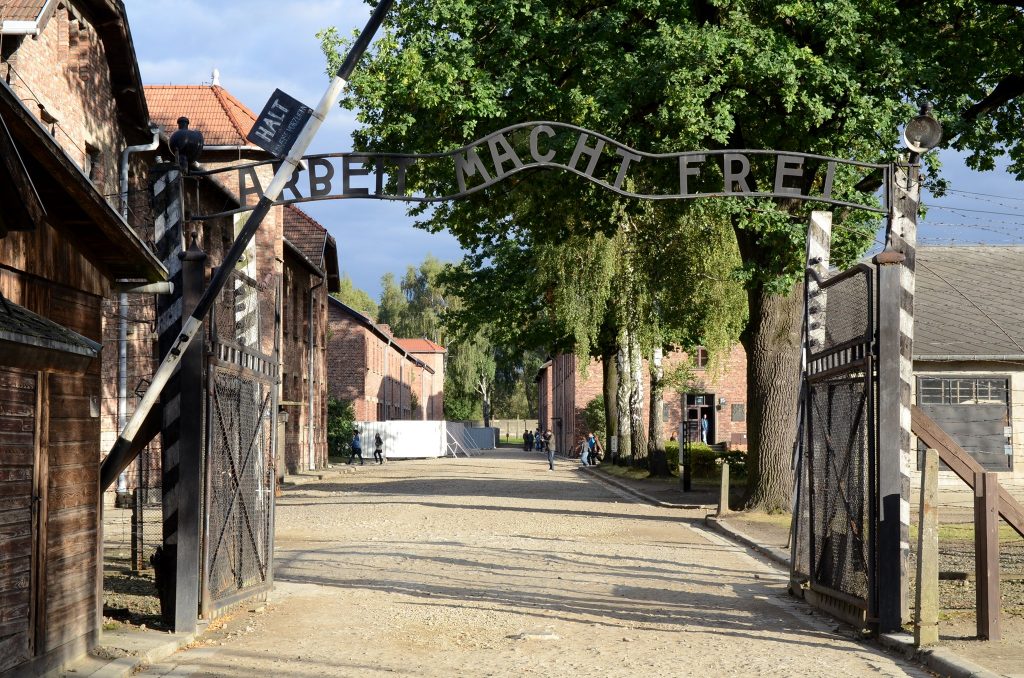 Auschwitz is the generic name given to the cluster of concentration, labor and extermination camps built by the Germans during the Second World War, located outside the town of Oświęcim in Lesser Poland Voivodeship, southern Poland, 65 km (40 mi) west of Kraków. The camps have become a place of pilgrimage for survivors, their families, and all who wish to remember and contemplate the Holocaust. The grounds are a UNESCO World Heritage Site.

Although not the only (or, indeed, not the first) German concentration and extermination camp, Auschwitz has become the foremost symbol of the Holocaust in global consciousness, representing terror, genocide, and the destruction of peoples. During the war, the camp complex became the largest ever operated by the Nazi regime.

Originally an Austro-Hungarian and later a Polish Army barracks before the start of the Second World War, the invading Nazis assumed authority over the military facility following the region’s annexation by the Third Reich in 1939. The neighboring town’s name of Oświęcim was Germanized to Auschwitz, which also became the name of the camp. Beginning in 1940, all Polish and Jewish residents of Oświęcim were expelled, replaced by German settlers, whom the Third Reich planned to make a model community. The camp began operations on 14 June 1940, originally housing Polish political prisoners, who made up a majority of the camp’s population until 1942. Poles were treated with extreme brutality, with more than half of the 130-150,000 Polish inmates dying.

As the number of prisoners grew, the camp expanded from the original barracks facility. Auschwitz II-Birkenau, in the nearby village in Brzezinka, underwent construction in October 1941 with the original purpose to house Soviet prisoners of war. Together with Polish inmates, Soviet soldiers were subjected to Zyklon B tests by the camp’s SS commanders towards the end of 1941. Beginning in 1942, Jews in massive numbers began to be sent to the camp complex, along with thousands of Roma prisoners. The complex later expanded to include Auschwitz III-Monowitz in October 1942, a slave labor camp providing work for the I.G. Farben industrial complex nearby. By the middle of the war, Auschwitz had grown to include 40 sub-camps in neighboring towns in the region.

From 1942 onwards, Auschwitz became one of the greatest scenes of mass murder in recorded history. The vast majority of the camp’s 1.1 million Jewish men, women, and children, deported from their homes across occupied Europe to Auschwitz, were sent immediately to their deaths in the Birkenau gas chambers upon arrival, usually transported into the camp by overcrowded cattle wagons. Their bodies were afterwards cremated in industrial furnaces in the crematoria. Those who were not killed in the gas chambers often died of disease, starvation, medical experiments, forced labor, or execution.

Towards the war’s end, in an effort to remove all traces of the crimes they had committed, the SS began to dismantle and raze the gas chambers, crematoria, and other buildings, as well as burning documents. Prisoners capable of moving were forced into death marches to other remaining areas of the Third Reich. Those who remained behind in the camp were liberated by Red Army soldiers on 27 January 1945. An estimated 1.3 million Jews, Poles, Soviet POWs, Roma, homosexuals, and Jehovah’s Witnesses had been murdered within the camps by the time of liberation.

The Polish Parliament established the Auschwitz-Birkenau State Museum on the grounds of the two extant parts of the camp, Auschwitz I and Auschwitz II-Birkenau in 1947. Auschwitz became a UNESCO World Heritage Site in 1979. Today, the memorial attracts normally a million visitors annually.

The closest airport to the site is John Paul II International Airport, better known as Balice Airport by locals, and is 54 km (34 mi) to the west next to Kraków on the A4 motorway.

Alternatively, visitors to Auschwitz can use Katowice Airport in Katowice, located 62 km (39 mi) north of the site. Known locally as Pyrzowice Airport, Katowice has direct connections with over 30 destinations across Europe and Asia, with numerous discount, charter, and normal flights in operation.

Several companies provide tours from Kraków for around 130-150PLN. These companies advertise heavily around the city, so visitors will have no problem finding one. These tours can involve a minibus pick-up from anywhere in Kraków, or a full bus with a guided tour. Tours are available from most hotels or tourist information centers. An average bus journey between Kraków to Auschwitz is 90 minutes, with usually some stops along the way.

Entrance is free in general, but visitor numbers are regulated by a ticket system. Be aware that because of the large numbers of visitors, entry to the Auschwitz I site is done exclusively on a paid guided (yet unfortunately rather rushed) tour between 10:00 to 15:00 during the period from 1 April to 31 October. You can visit the site on your own (which is highly recommended, as visitors can go at their own pace, see what they want to see, and have a much more meaningful experience) if you arrive before 10:00 (better 8:00-9:00) or after 15:00 (depending on the season and day of week).

The tour takes 3 hours with a 20 minute break after about 1.5 hours. Tours run every 15 minutes or every 30 minutes depending on the tour language.

The Auschwitz II-Birkenau site is open for visitors without the guide during the opening hours of the Memorial. You can also book a private tour guide from the museum for a 6 hour study tour (400PLN).

The museum is open all year long, seven days a week, except January 1, December 25, and Easter Sunday. The hours the entire memorial follow those of the museum.

The Auschwitz Memorial and Museum is easily navigated on foot. There is a free shuttle bus between the Auschwitz I and Birkenau sites, leaving every half hour at the top of the hour from Auschwitz I to Birkenau, and going the opposite way every 15 minutes of the hour at half hourly intervals. Please check the timetable at the bus stop as intervals and shuttle operation hours may change depending on the season, or you can walk the two miles between the camps. If you’ve just missed a bus, a taxi between the sites will cost about 15PLN.

Tours are provided by the museum for a fee in various languages, and are recommended if you want a deeper understanding of the site, but they are unfortunately somewhat rushed, and you can get a pretty good feel by buying a guidebook and map and wandering around on your own left to contemplate the site. Each exhibit is described in Polish with other language translations. The scope of the evil and terror that occurred here is almost unimaginable, and a guide can help to put in context what a room full of human hair or what a thousand pairs of infant shoes means. They’ll also tell you about former prisoners who have returned to see the museum.

What to see. Best top attractions in Auschwitz

Auschwitz-Birkenau State Museum (Państwowe Muzeum Auschwitz-Birkenau), ul. Stanisławy Leszczyńskiej 11. January, November 8:00-15:00; February 8:00-16:00; March, October 7:30-17:00; April, May, September 7:30-18:00; June, July, August 7:30-19:00; December 8:00-14:00. The entrance to Auschwitz I is home to the Auschwitz State Museum, which presents a 15 minute film, shot by Soviet troops the day after the camp’s liberation. The film costs 3.5PLN to view (and is included in the price of a guided tour). Showings are between 11:00 and 17:00 (in English at the top of the hour and Polish at the half hour). Highly recommended, but disturbing and not suitable for small children. Bookstores and bathrooms are here. Also consider buying a guidebook or map.

Auschwitz I, ul. Stanisławy Leszczyńskiej 11. The first camp to be used (called Stammlager by the Germans), consisting of old Polish Army barracks later converted into inmate housing, torture chambers, execution grounds, and SS administrative buildings. The infamous Arbeit macht frei gate is found here. Inside most of the barrack buildings are historical exhibits regarding the various nationalities held in the camp, video displays, photos, and personal belongings illustrating the life and cruelties of the Nazi terror. The only remaining gas chamber is found in Auschwitz I but note that, as indicated within the chamber, it was reconstructed to its wartime layout after the war.

Auschwitz II-Birkenau, ul. Ofiar Faszyzmu 12. The second and largest part of the camp complex, located 3 km from Auschwitz I in the village of Brzezinka, site of the notorious railway gate. Visitors can see the remains of buildings where incoming prisoners were shaved and given their “new” clothing, the ruins of the five gas chambers and crematories, numerous surviving barracks, ponds where the ashes of hundreds of thousands were dumped without ceremony, and a large stone memorial written in a multitude of languages. Walking through the entire site may take several hours. Some visitors may find the experience harrowing.

What to do in Auschwitz

Participate in one of the guided tours of the site, or wander on your own through the site.

Visit on your own a day or two after a guided tour. A guided tour gives a lot of useful information and history of the site, but also may be a bit rushed to fully experience the emotions of the place.

There’s a basic cafe and cafeteria in the main visitors’ center of Auschwitz I, with more options in a small commercial complex across the street. Additionally, there is a coffee machine in the Birkenau bookshop. Several small stalls selling drinks and food are close to the main museum at the end of the Auschwitz I bus/car park.

You cannot sleep at the camps. The closest accommodation options are in nearby Oświęcim.

Please remember that you are essentially visiting a mass grave site, as well as a site that has an almost incalculable meaning to a significant portion of the world’s population. There are still many men and women alive today who survived their internment here, and many more who had loved ones murdered on these grounds, Jews and non-Jews alike. Please treat the site with the dignity and respect it solemnly deserves. Do not make jokes about the Holocaust or the Nazis. Do not deface the site by marking or scratching graffiti into structures. Pictures are permitted in outdoor areas, but remember this is a memorial rather than a tourist attraction, and there will undoubtedly be visitors who have a personal connection with the site, so be discreet with cameras.

Holocaust denial is a criminal offense in Poland, with penalties ranging from heavy fines to a three-year prison sentence.

Watch a video about Auschwitz