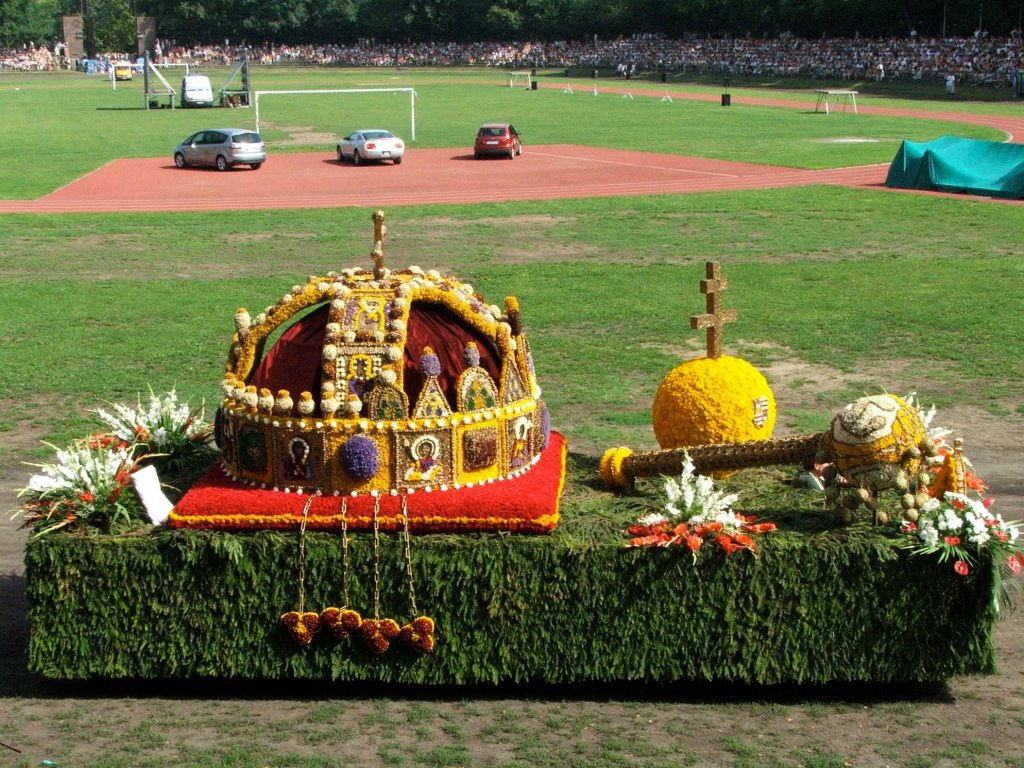 Debrecen is the “Capital city of the Great Hungarian Plain”, and the county seat and largest city of Hajdú-Bihar county in eastern Hungary. It is the second largest city in the country with about 200,000 inhabitants and historically the most important city in Hungarian Protestantism.

They used to ask “who in their sane mind would build a city in the middle of nowhere where there are no mountains, or roads?”. Well, the answer is easy: thanks to the Great Plain situated in this area earlier there had been agricultural villages settled here. Step by step these villages were built together, a common administrative and cultural centre was created, and nowadays Debrecen is the second largest city of Hungary.

It used to be Europe’s largest Calvinist city (was called “The Calvinist Rome“), and the Grand Church (Nagytemplom) is a reminder of the city’s heritage.

Debrecen also has a university with all kinds of science areas. It has about 25000 students. The main building at the Nagyerdő is beautiful.

Although the quickest way to get around is often on foot, there is an extensive network of trams, trolleybuses and buses all around the city and its suburbs. Head ways of trams and trolleybuses are 5-15 minutes, while frequencies on bus lines vary. There are two tram lines which serve the north-south axis of the town, while the east-west axis and the peripheries are served by the trolleybus and bus lines. Trams also provide good means of hop-on hop-off travel within the very center of the town. Tram line 1 starts from the railway station, goes along the main street, turns at the Grand Church a bit, goes to the Old Forest, then in a big loop it goes around the Forest to stop at the Zoo, the Theme Park and Public Bath, the Medical and Main campuses of the Universities, then back.

The most effective way to get around in the inner city is to walk. Most of the sights are in a couple of hundred meters from each other. While the center reflects the former status of Debrecen as an important cultural centre and capital with multi-story Classicist and Art-Nouveau buildings, the picture radically changes just a couple of streets away, where closed rows of one-level, large-gate houses dominate the view, that are typical to the smaller towns of the Great Plains of Hungary. Further away from the centre there are many higher concrete-block buildings.

There are many nice streets around, however there are many less attractive ones as well, but walking around is generally safe. Try Nagyerdő (the Great Forest): it is beautiful.

The city center is just the right size to walk around but there are places where it is comfortable to drive. The road conditions are good but during peak hours some of the major intersections will get crowded, expect some delays around 8-9 am and 4-5 pm. The center is not accessible by car and it takes time to navigate around it. Sixt, Hertz and Avis are available in the city if you want to rent a car. It is also possible to order your rental to the airport.

Although Debrecen is the second largest city in the country, it is a way smaller place with about one tenth the inhabitants, so do not expect as buzzing life as in Budapest. Still there are quite some attractions that reflect its former status as a main hub of the Great Plains, a cultural centre and once even the capital of Hungary.  The Nagytemplom is a must see and easily accessible. As for museums, the Déri Museum is definitely worth a trip, but all the others really depend on how much Hungarian art interests you. Most of the major attractions are in the City Park, or Nagyerdő, where you could easily spend a pleasant afternoon.

Nagytemplom (Great Church) on Kossuth tér is Debrecen’s most recognizable building and a symbol of the city. It is the centerpiece of what was once called “Calvanist Rome”. Visitors can tour the interior, as well as go up in the tower to see the Rákóczi bell, the largest bell in Hungary, and excellent views of the city.

Szent Anna-székesegyház (St. Anne Cathedral) is the major Catholic Church in Debrecen, also an episcopal seat of the Debrecen-Nyíregyháza diocese since 1993. The church is located at the intersection of the Piac (main) and Szent Anna streets. Its construction began in 1721 in baroque style. It has been completed with the spires in 1934 as part of a reconstructed after a fire.

Kistemplom (Small Church) is a Calvinist church located at the intersection of the Piac (main) and Széchenyi streets. It got its nickname Csonkatemplom (Stumpy Church) from the lack of spire that gives its tower an unfinished appearance.

The Orthodox Synagogue on Pásti Street was constructed in 1894 and has been completely renovated recently. It is used as a sacral place on religious holidays, and for exhibitions in the meantime. Other related establishments include a regularly operating prayer house from 1910, an exhibition, an old mikve (ritual bath), a slaughter-house. The Kápolnás street Synagogue was built in 1910 and fully reconstructed recently.

A muslim prayer house was established on Egyetem sugárút in 2015.

The Déri Museum is the largest museum in the city.it is Déri tér 1; (right behind the Great Church, take tram #1) is a place to see. It’s a national museum with all kinds of arts. There is a nature display showing the animal life of the region, another collection featuring historical items from the region, and an art gallery featuring works from Hungarian artists. It’s most famous work is Hungarian Mihály Munkácsy’s Christ trilogy, three large paintings depicting Christ before Pilate, the Crucifixion, and Ecce Homo!

Ferenc Medgyessy Memorial Museum on Péterfia u. 28; (just behind the Debrecen Plaza and most easily reached by tram #1) displays the works and life of the artist.

László Holló Memorial Museum on Holló László sétány 8; (located in Tócóskert, take bus #19) is housed on a one-acre park featuring a cottage housing the artist’s works and a statue garden.

Delizsánsz Kiállítóterem – Postamúzeum (Post Museum) on Múzeum u. 3. (across the square from the Déri Museum in the main post office).

Nagyerdő – The City Park. Located just north of the downtown is the 2280 hectare city park which offers fine walks as well as several opportunities for fun and entertainment. Tram no. 1 provides excellent access to the area.

The University of Debrecen was founded in 1538 as the Calvinist College of Debrecen. It is the oldest continuously operating university in Hungary. It has a well-established program in the English language for international students. Currently there are two major sites of the university: The Nagyerdő (see below) and the Kassai út campuses. The main campus of Debrecen University (formerly the campus of Kossuth Lajos Science University) is located on Egyetem tér, just west of the park, is one of the largest universities in the region and good for a stroll. The main building was constructed in 1932. Its front facade together with the fountain and the fir trees around provide an iconic view from the northern end of the Egyetem sugárút.

Vidámpark (Amusement Park) on Ady Endre út 1. is not as large or impressive as the park in Budapest, but nevertheless boasts to be the largest such park this side of the Tisza. There are 15 rides including a fantasy castle, ferris wheel, and a children’s railroad.

Állatkert (Zoo) on Ady Endre út, together with the Vidámpark forms the Culture Park.

Aquaticum  on Nagyerdei Park 1. is the major resort of the town. It features a water park, public pool, bath house, hotel, and restaurants.

DVSC Stadium is where the local soccer team plays (nicknamed “Loki”). They most recently won the Hungarian championship in 2005 and 2006.

Botanical Garden. Just adjacent to the campus, there is a botanical garden on the west side of Egyetem tér.

What to do in Debrecen

Debrecen Plaza located just north of the city center and easily reached by tram #1 is a small shopping mall. There is, however, a multiplex movie theater, supermarket, arcade, and food court with McDonalds.

Forum shopping mall. A newer mall just a block east of Debrecen Plaza. It also has a food court and many stores – being larger and more diverse than Debrecen Plaza.

Flower Carnival (Virágkarnevál): 20th August, every year there’s a whole day of celebrating the summer and national holidays, with moving pictures or statues made of flowers, and lots of other mardi gras.

Erdőspuszták The Woodlands (Erdőspuszták) is a natural preservation area that surrounds Debrecen from the east.

Zsuzsi Forest Railway, established in 1887. Once extending 38 km long from Debrecen towards Nyírmártonfalva to facilitate forestry in the woodlands and transport passengers from villages and hamlets around Debrecen to the city, today the Zsuzsi narrow gauge railway carries happy crowds to an excursion to the small hill of Hármashegyalja. The nickname of an old wood-fired locomotive gave its now official name Zsuzsi (for Susy) to the railway, even though it is diesel-operated since 1961.

The Hortobágy National Park about 25 km to the northwest of Debrecen, is the first and largest national park in Hungary. It preserves traditional life (both of nature and people) of the Puszta on the Great Plains of Hungary. There is a train every 2 hours from the Grand Station. If travelling by car, take route no. 35.

Hajdúszoboszló, sometimes dubbed as the Mekka of the Rheumatics, is a town to the west along route 4 that is mostly known of its spas. There is a frequent bus service there from the coach station.

Nyíregyháza, a smaller city 50 km away to the nort, with several parks and squares and the water resort of Sóstó, is the seat of the Szabolcs-Szatmár-Bereg country. The travel time with the hourly InterCity service from the Grand Station takes half an hour. By car it’s about an hour either on route 4 or motorways M35 (towards Budapest) then M3 (towards Nyíregyháza).

Watch a video about Debrecen