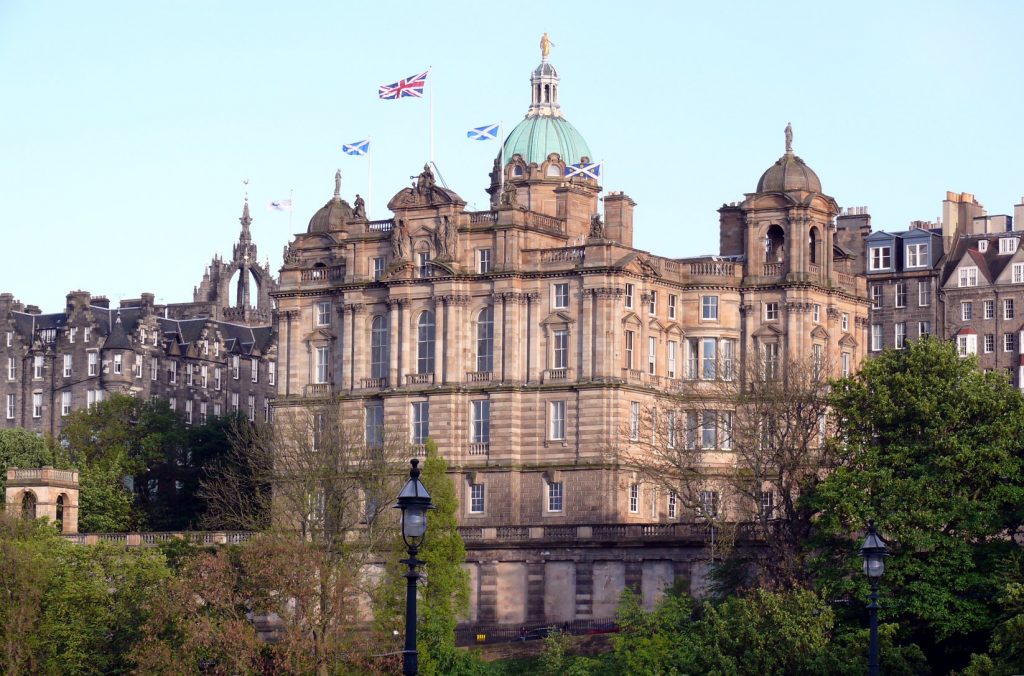 Peebles, a Historical Town set in the beautiful Tweed Valley is 45 minutes from Edinburgh. The Town offers a very interesting historical town walk with lovely individually owned unique shops, a weekly market (Thursdays) and an array of eating places and coffee shops. There is also Traquair House, the oldest inhabitated House in Scotland which also has Gardens and a Brewery – the famous Traquair Ale – which is located only a few miles from Peebles. There are lots of attractions nearby including Dawyk and Kailzie Gardens, Robert Smails Printing Works and Go Ape Tree Top Adventure. Local events include the Beltane Festival, Highland Games and Agricultural Show.

South Queensferry— On the north-western fringe of the city, site of the contrasting engineering marvels that are the Forth Bridges (one road and one rail). Quite a few hotels here and with good transport links to the city centre it can be a good base for visitors.

Glasgow, Scotland’s largest city, is located 46 miles west of Edinburgh and is easily reached via train, bus (running from the main bus terminal) or via the M8 motorway. Great for shopping and has some excellent museums and galleries.

Fife is a predominantly rural county, with some lovely old towns and villages dotted throughout. This is the coast which can be seen across the Firth of Forth from many viewpoints around the city. It’s easy to get to via the twin road and rail bridges across the Forth.

Dunfermline, previously the capital of Scotland, makes an excellent day trip. It is easily accessed by car via the Forth Road Bridge. There is a half hourly service by train from Waverley station (also stopping at Haymarket).

Described as “The Jewel of Fife”, Aberdour is a historic and stunningly attractive coastal village 40 minutes’ drive North of Edinburgh. Aberdour Castle is a must-see, as well as the Blue-Flag awarded beach the Silver Sands. There are also several pubs, restaurants, and boutique shops. Also served by a half-hourly rail service from Edinburgh – journey time 30 minutes.

St Andrews— Ancient university town, former ecclesiastical capital of Scotland, and home of the Royal and Ancient – the ruling body of Golf.

East Lothian, immediately to the east of the city, offers rolling green countryside, golden sandy beaches, dozens of golf courses, and more annual sunshine hours than any other part of the UK. The area has a number of picturesque villages and small towns, including North Berwick, with webcams at the Scottish Seabird Centre giving live pictures of thousands of birds on the Bass Rock; Gullane, a mecca for golfers; Musselburgh for ice cream and horse racing; and Dunbar, a pleasant harbor town famous as the birthplace of conservationist John Muir.

The Museum of Flight in East Fortune is about 30 minutes’ drive along the A1 towards Dunbar. It is also close to Drem station on the Edinburgh to North Berwick line. It is home to a number of historic aircraft from across the history of flight, including British Airways Concorde G-BOAA. Remember to book in advance to see inside Concorde as these tickets are generally sold out on the day. Another rather good attraction (and well worth the look) is the De-Havilland Comet 4C, a modified version of the World’s first jetliner.

West Lothian is the area to the west of the city. Generally less pretty than its eastern counterpart, but does have a couple of destinations worth the effort.

Linlithgow with its Palace, and links to Mary, Queen of Scots, is a great little town for a day trip from Edinburgh. It is a short drive by car on the M9. There is also a frequent service by train from Waverley station (also stopping at Haymarket).

Livingston— One of Scotland’s New Towns, it is one of Scotland’s most popular shopping spots, only a short drive from Edinburgh on the M8 or A70. Plus there are also bus and rail services to the new town.

The Falkirk Wheel built in 2001 to reconnect the Forth and Clyde Canal with the Union Canal; it is the world’s only rotating boat lift. Free entry to the visitor centre / cafe / gift shop. Boat trips up on the Wheel take about an hour. Half hourly buses from Falkirk town centre or a good walk from the Falkirk “Camelon” railway station. You can also cycle along the Union Canal from Edinburgh – the route is part of the National Cycle Network.

The Glentress Moutain Biking Centre is the largest mountain biking centre in Scotland, and one of the best in the UK. Routes are provided for cyclists of different skill levels, and are signposted so you won’t get lost. You can get there on the 62 bus from Edinburgh in just over 1 hour.

The Pentlands Hills Regional Park is a low-lying hill range to the South of Edinburgh, popular with walkers and cyclists. Getting there takes around 30 minutes on the bus, or 45 minutes by bicycle from central Edinburgh. Cyclists are allowed to take bikes on buses run by MacEwans’s Coach Services which stop at the Flotterstone Inn. Map of official mountain bike routes. Local walks – look for ones with “Pentland” in title.

National Cycle Network routes around Edinburgh is well connected to the NCN with a variety of places accessible within a day’s cycling – Glasgow, Stirling, Falkirk, Musselburgh, and Dunbar – all of which have train stations for the return journey. The number 1 route which goes south from Edinburgh to Melrose in the borders and then east to Berwick-upon-Tweed (and then back on the train) can be done in one weekend with a variety of accommodation available for an overnight stay in the historic border town of Melrose.