Explore Larnaca where east meets west in the ancient district of Larnaca, where hundreds of years of contrasting civilizations, architecture and culture have left their mark on an authentic and diverse region.

Both Christianity and Islam have important religious sites in Larnaca. The Church of Saint Lazarus, who lived in Larnaka after his resurrection, and the Mosque of Hala Sultan – built in honor of the Prophet’s Mohammed’s aunt – are two of the main attractions of the city. Other popular sights are the Medieval Castle, the palm tree-lined promenade of ‘Finikoudes’, and Larnaca Salt Lake, which fills with flocks of vibrant pink flamingos during the winter months.

Further out, the mountainous areas of Larnaca trail up the Troodos range, which is dotted with charming villages of narrow streets, where traditions and skilled handicrafts are still practiced. Of the most famous is the handmade lace embroidery of Lefkara and its delicate filigree silver, whilst villages like Kato Drys, Vavla and Odou are also pretty and tranquil.

The region is also rich in significant archaeological sites, including ‘Choirokoitia’ – one of the best-preserved sites of a prehistoric settlement in the Eastern Mediterranean – and ‘Kalavasos Tenta’, located in the rural areas.

One of the finest examples of Byzantine art of the Justinian period – a rare 6th century mosaic of the Virgin and Child between two archangels – can be found in the region at Angeloktisti Church in Kiti village, whilst the solitary monastery of Stavrovouni, one of the oldest on the island, sits perched on a rocky peak with panoramic hillside views. In Pyrga village, the Royal Chapel – built in 1421 by the Lusignan King Janus – is decorated with an interesting wall painting of the king and his wife, Charlotte de Bourbon.

Enjoy a melting pot of diversity and history, combined with coast and mountains in the captivating region of Larnaca.

Get around
Larnaca is a thin ribbon of a town and you can walk around most of it. The seaside Larnaca Promenade (Phinikoudes) is particularly pleasant for a stroll in the evening.

What to see
The Church of St. Lazarus (Ayios Lazaros Sq), an Orthodox church dating to the 9th century, is reputedly built around the tomb of the biblical Lazarus, brother of Mary.
The Larnaca Salt Lake is to the west of town near the airport. In winter (November to March), flocks of pink flamingos can be seen here.
The Hala Sultan Tekke mosque is perched by the side of the Salt Lake. The tomb of Umm Haram, the foster mother of Mohammed, is said to be here.
Faneromeni Church (Ekklisía tis Faneroménis). This mashup of various architectural styles used to stand in the centre of the city – until 1974. There is a marble mausoleum next to it.

Diving the wreck of the Zenobia
For divers the main reason to come to Larnaca is the wreck of the Zenobia, a ro-ro ferry that sunk in 1980 on her maiden voyage only a few hundred meters from the harbor due to a fault in the ballast computer. Fully laden with trucks and their cargo, the ship now lies on its side at a depth of 42 meters, with the top of the wreck at 18m and thus easily accessible even to PADI Advanced Open Water divers. If your flight comes in right, you can even see the shadow of the wreck as you land at Larnaca airport!

Moments & Meze – City Walking Food Tour. This city walking tour introduces you to the old town of Larnaca through food. A great way to get your bearings around the city and discover great places to eat for your Larnaca stay.

Action Park is the largest & most exciting play centre in Larnaca where children of all ages (from 10 months to 12 years old) will spend endless hours playing while parents relax with free WIFI and all the sports channels. There is a wide selection of food, drinks and desssets also available.

Nissi Beach Day trip with intercity bus to Ayia Napa and/or city bus 711. The beach has yellow sand and clear blue water. There are some rocks and hints of seagrass. In front of the beach is a rock for Cliff jumping. Unfortunately over-full. No shadow without umbrella.
Finikoudes Beach Does not look very nice (sand is dark) but the water looks clean. The water is very shallow (you have to go 100m to swim). There are no rocks and no seagrass. Behind the last row of sunbeds sits somebody from city Lanarca. There is almost no hassle with stranger selling stuff. The beach has changing room, toilet exists near bus station; the shower are with costs. Opposite the beach exists local and international restaurants (McDonalds, KFC, TGI Fridays), and cafes (Starbucks) and a kiosk (near the castle). No shadow without umbrella.

Paphos Archaeological Park There exists one intercity bus that goes to Paphos without stop in Limmasol. (Intercity Famagusta – Larnaca – Paphos). It takes approx 1.5 – 2 hours. Currently the bus stops at Finikoudes Bus stop at approx 8:45 am. It arrives in Phaphos Habour – the tourist area of Phaphos. The Archaeological Park is a short walk from the bus stop.

Tombs of the Kings is a little bit north – check local bus. The bus back to Larnaca leaves at 4 pm at Karavella Station. There are cheap boat tours (90 minutes). No sandy beach at the habour.

Day Trip to Nicosia and  Limassol.

Larnaka Cultural Walk. A stroll around Larnaka to take in all the essential landmarks is the perfect year-round activity, and with the option of three defined walks, you can visit a wide range of sites and learn all about the town’s history and customs at your own leisure and pace!
Cyprus Tourism Information Office, Vasileos Pavlou Square, Larnaca, Cyprus. The tourist information in near Europa Square.

What to Buy
The nearby village of Lefkara is famous for its lace and silverware, and Larnaca being the nearest large town to the village, sells both in plentiful supply.

Independent jewellers and watchmakers are abundant, particularly among and just off the main Ermes/Ermou Street.

What to Eat
Often, eating in Larnaca can be quite expensive. However, if you’re travelling on a budget, there are a few bargains to be had. Possibly the cheapest way is by grabbing a hotdog at the ‘Enjoy… Finikoudes’ kiosk on, you guessed it, Phinikoudes Avenue. Hotdogs are just €1 and are rather enjoyable. If you prefer to sit down for a meal, try Ocean Basket (also on Phinikoudes Avenue) where a huge, tasty serving of Fish and Chips will set you back just €5.95, which is comparable to (if not less than) the price of a meal at the likes of Phinikoudes’ McDonalds or KFC, which are also useful places for eating on a budget, even if they do lack that local touch.

The beaches of Larnaca are littered with identikit seafood restaurants catering to tourists. The easiest way to find a good place is to simply walk along until you find a restaurant packed not with tourists, but with Cypriots!

Driving about 15-20 minutes away from the City Centre to the East in the direction of Ayia Napa is the Larnaca-Dhekelia Road. This is the main ‘strip’ for high quality hotels, nightclubs, bars, etc, and is where most British Tourists can be found.

Watch a video about Larnaca 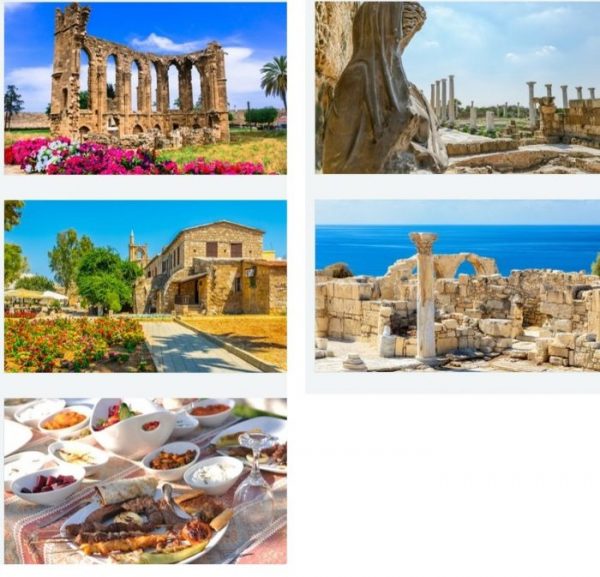