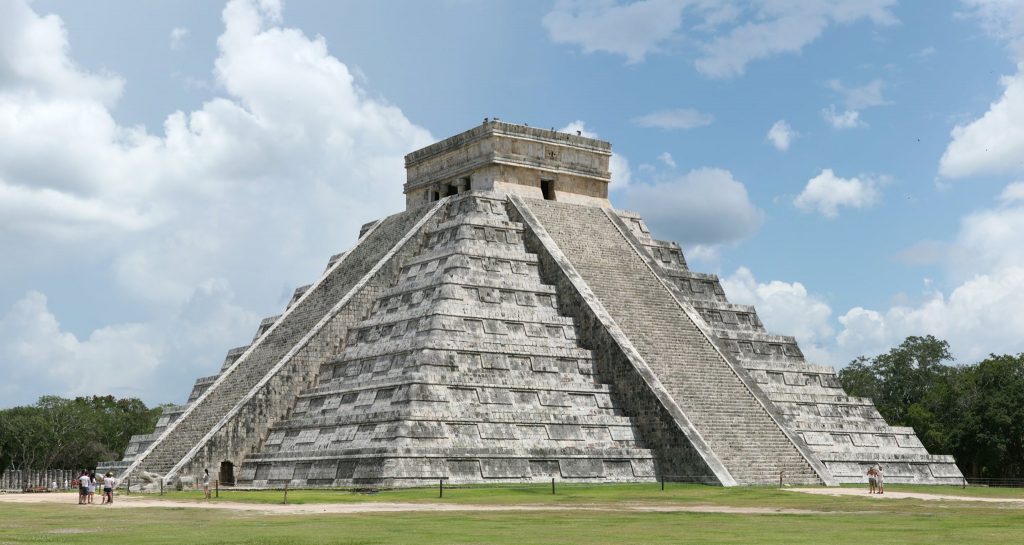 Explore Chichen Itza, the largest of the archaeological cities of the pre-Columbian Maya civilization in the Yucatan Peninsula of Mexico. It is one of Mexico’s most visited tourist destinations. It was granted World Heritage Site status in 1988 by UNESCO World Heritage Site and was recently selected as one of the New Seven Wonders of the World.

Many tourists visit Chichen Itza as a day trip, especially from Cancun more than 100 miles away. This archaeological site is also an hour and a half away from Merida, the capital of Yucatan. The Maya communities near Chichen Itza have developed many wonderful sites for travelers to rejoice in the Maya Cultural heritage. It is recommended you avoid a day-trip visit to Chichen Itza and schedule a night or two to enjoy all the activities nearby. This allows time to see more than just a portion of this large site. If you stay a night here, come to the archaeological site early in the day before the sun is so hot, and before most of the day-trippers arrive. This is a large park and usually visitors are on a tight schedule, consider the services of a guide. They can be found in the museum at the entrance and are very nice and reasonably priced. If you tire of their company, they will not be offended if you mention that you would like to visit on your own. A guide can give you information on sleeping overnight at the site.

Chichen Itza was a center of pilgrimage for the ancient Maya for over 1,000 years. The Sacred Cenote (a large natural well or limestone sink hole) was holy to the ancient Rain God “Chac”.

About 987 the ruler of the Toltec people of central Mexico came here, and with his Maya allies made Chichen Itza the most powerful city in the Yucatan. The ruler called himself “Kukulcan”, the name of the Mesoamerican Feathered Serpent deity (also known as “Quetzalcoatl”) and Chichen Itza became a center for worship of that god as well. More buildings were built here in a mixture of Maya and Toltec styles.

About 1221 the Maya revolted against the rulers of Chichen Itza. The city was not abandoned, but as political power shifted elsewhere it declined and no major new buildings were constructed. The reasons for the final abandonment of the city are unknown, but Spanish documents show that the city was already abandoned on their arrival.

The structures of Chichen Itza were overgrown with jungle and slowly decayed until major archaeological projects began in the 1920s. Since then, more of the ancient structures have been cleared and restored and more and more tourists come to visit.

At the site you get around on foot. Wear sturdy, comfortable walking shoes; consider that you may want to try climbing rough stone stairs in them. Sunscreen and a broad-brimmed hat may be good ideas too. There is very little usable shade in the middle hours of the day. Bring a pair of binoculars, star-gazing and birding is incredible in this region. Also, if you want to know more about the Mayan local communities, their cooking, religious rites, calendar system and ancient arts; visit the small towns around Chichen.

What to see. Best top attractions in Chichen Itza, Mexico

These are the vestiges of a fascinating civilization of times past. Well informed guides speaking all major languages are available for hire here, or download a guide book app for your smartphone or you explore on your own with a guide book and map.

The Pyramid of Kukulcan or El Castillo — the most famous landmark of Chichen Itza. This was a temple-pyramid dedicated to the Feathered Serpent God, Kukulcan. It is nicknamed “The Castle”. Sculptures of the Feathered Serpents run down the sides of the northern staircase, and are set off by shadows from the corner tiers on the spring and Fall equinox.

Interior Temple The Maya would often build newer bigger temple-pyramids atop older ones. Archaeologists have constructed tunnels allowing a view of the earlier temple of Kukulcan inside the later one. Go in the door at the foot of the north stairway, and you can go up a steep interior stairway up to the room on the top where you can see King Kukulcan’s Jaguar Throne, carved of stone and painted red with jade spots. It is an impressive sight, but the climb up the narrow interior passageway may be too much for those with some claustrophobia.

Great Ballcourt – there are 7 courts for playing the Mesoamerican ballgame at Chichen Itza. This one is by far the largest and most impressive, not just at the site but in all of ancient Mesoamerica.

Temple of the Jaguars – Attached to the ballcourt complex, with stone jaguar, feathered serpent columns, and murals inside.

Sweatbaths – there are many Zumbul che structures found in both Chichen Itza and Old Chichen sites. These Maya sweatbaths played an important role in ancient Maya spiritual traditions as places to purify the mind, body, and emotions, thus getting in touch with one´s pure spiritual energy.

High Priest’s Grave – a smaller version of the “Castillo” served as a tomb for one of the city’s rulers.

Temple of the Wall Panels

Old Chichen – another group of buildings and temples a few minutes’ walk from the center of the site. Old Chichen is clustered within the private property of Hacienda Chichen and not open to public visits. This Maya archaeological site is south of the commonly visited Maya ruins. It is part of the Maya Jungle Reserve and Nature Trails and open only to the Hacienda Chichen guests and visitors for bird watching and horseback-riding tours. Currently a few Maya temples are under reconstruction by INAH, they include:

The Caves of Balankanche, where a large selection of ancient pottery and idols may be seen still in the positions where they were left in Pre-Columbian times.

Light & Sound Show. The light show is really spectacular and lasts about 30 minutes. The narration is only in Spanish. Admission is free, but you need to write down your name in a waiting list to get a seat (if you don’t, you have to enter after people with tickets and you have to stand, but it really doesn’t matter that much).

“Tales of the Maya Skies” – this is a dome planetarium show produced by the Chabot Space & Science Center in Oakland California. It is shown in English and Spanish (alternating) at the Mayaland Hotel. The “Mayan Planatarium” is a new building.

What to do in Chichen Itza, Mexico

The area has excellent bird watching opportunities. Guests at at the Hacienda Chichen have access to the hotel’s bird refuge and extensive nature trails.

There are several fantastic cenotes, fresh water sinkholes in the limestone, found near Chichen Itza. Some of them are surrounded by lush gardens with restaurants, washrooms and showers. During a hot day, cenotes make for a great way to cool yourself off in the afternoon, take a break and split up your day.

Toh Boutique and The Maya Hut sell Maya craft, textiles and jewelry. Purchases support the Maya Foundation and the Nature Conservation and Bird Refuge Program, reforesting the region and preventing the illegal hunting of white tail deer and other animals in the area. They also have a tradition of dancing.

Random Vendors Vendors are situated in many areas around the ruins selling statues of Mayan gods, paintings on small pieces of leather, obsidian, and other collectibles. They’ll tell you it costs a dollar to get your attention, but the price changes when you negotiate.

Hacienda Chichen. Offers regional, international and vegetarian dishes, in a 16th Century colonial terrace built with Maya carved stones (appropriated from the archaeological site by Spanish conquerors) overlooking lush tropical gardens. Some of the vegetables and fruits are organically grown by the owners in the south end of the gardens.

When you explore Chichen Itza make sure to drink lots of bottled water. Those not accustomed to the tropical heat and sun can otherwise risk dehydration. There are several refreshment stands in the archaeological site.

Watch a video about Chichen Itza