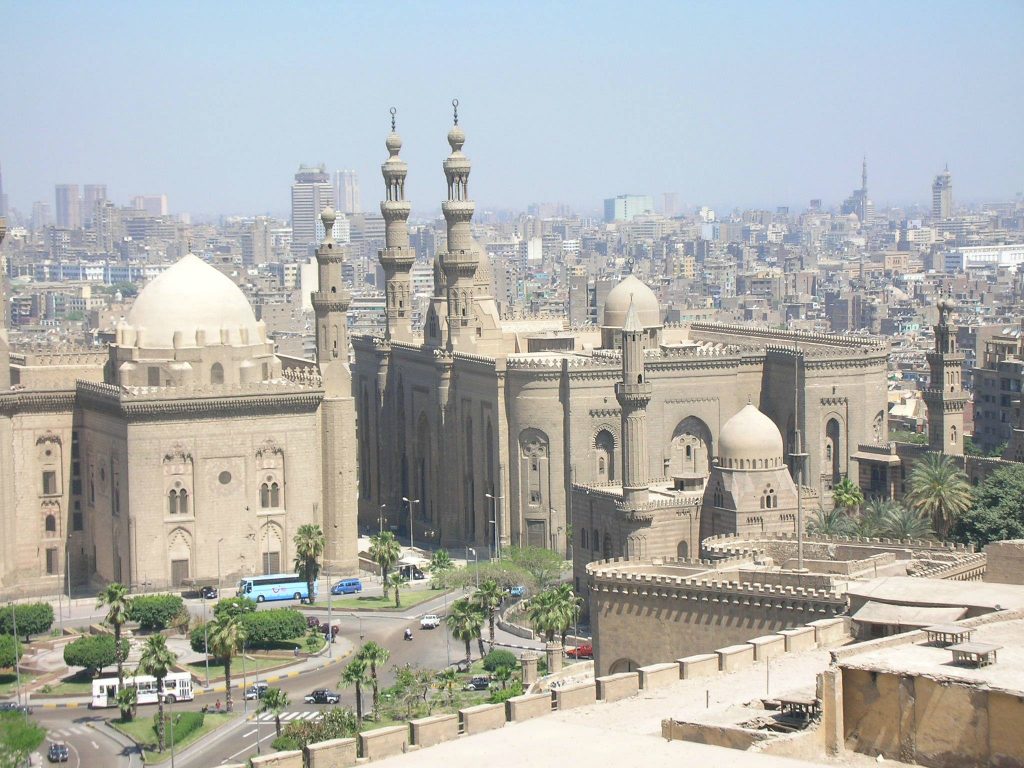 Explore Cairo, the capital of Egypt and, with a total population in excess of 16 million people, one of the largest cities in both Africa and the Middle East. It is also the 19th largest city in the world, and among the world’s most densely populated cities.

On the Nile River, Cairo is famous for its own history, preserved in the fabulous medieval Islamic city and Coptic sites in Old Cairo. The Egyptian Museum in the centre of town is a must see, with its countless Ancient Egyptian artifacts, as is shopping at the Khan al-Khalili bazaar. No trip to Cairo would be complete, for example, without a visit to the Giza Pyramids, and to the nearby Saqqara Pyramid Complex, where visitors will see Egypt’s first step pyramid built by the architect Imhotep for the third dynasty Pharaoh, Djoser.

Though firmly attached to the past, Cairo is also home to a vibrant modern society. The Midan Tahrir area situated in downtown Cairo area, built in the 19th century under the rule of Khedive Ismail, has strived to be a “Paris on the Nile”. There also are a number of more modern suburbs including Ma’adi and Heliopolis, while Zamalek is a quiet area on Gezira Island, with upmarket shopping. Cairo is best in the fall or spring, when the weather isn’t so hot. A felucca ride on the Nile is a good way to escape from the busy city, as is a visit to Al-Azhar Park.

Giza district is a sprawling western district of the city overlooking the Nile where the Giza Zoo is located as well as a few other attractions. Giza Governorate contains the Haram district where the Giza Pyramids are located. The Governorates of Cairo and Giza have more or less merged into the same city of Greater Cairo, although originally they were two different cities. The term Giza commonly refers to the district of Giza which is within Cairo, not the actual location of the pyramids!

Heliopolis and Nasr City are actually completely distinct areas. Heliopolis is an older district where well-to-do Egyptians and higher class people live, built by a Belgian architect. Nasr City is newer, and contains City Stars, Cairo’s biggest and most modern shopping mall, and retail social complex. The airport is actually located a bit further east of this area out in the desert near Masaken Sheraton

Situated along the Nile, Cairo has ancient origins, located in the vicinity of the Pharaonic city of Memphis. The city started to take its present form in 641 AD, when the Arab general Amr Ibn Al-Ase conquered Egypt for Islam and founded a new capital called Misr Al-Fustat, “the City of the Tents”, due to the legend of Al-Ase finding, on the day he was leaving to conquer Alexandria, two doves nesting in his tent. Not wanting to disturb them, he left the tent, which became the site of the new city in what is now Old Cairo.

Cairo has a hot desert climate like most of Egypt’s interior. The best time to visit the city is from November to March when days are pleasantly warm and nights are relatively cool.

Today’s Greater Cairo is a city, where skyscrapers and fast food restaurants nestle up to world heritage monuments. Originally, Cairo was the designated name of the city on the eastern bank of the Nile, and this is where you’ll find both the modern Downtown, built under influence of French architecture, today the centre of commerce and popular life, as well as historical Islamic and Coptic sights.

Outside the core on the eastern bank, you’ll find the modern, more affluent suburbs of Heliopolis and Nasr City near the airport, and Ma’adi to the south. In the middle of the Nile is the island of Gezira and Zamalek, more Western and tranquil than the rest of the city. On the western bank is a lot of modern concrete and business, but also the great Giza pyramids and, further to the south, Memphis and Saqqara. The city might seem like a lot to handle, but give it a try, and you will find that it has a lot to offer for any traveller.

When you approach any individual or a group of people for the first time, the best thing to say is the local variation of the Islamic form of greeting “Es-Salāmu-`Alēku” which literally means “Peace be upon you”. This is the most common form of saying “hello” to anybody. It creates friendliness between you and people you don’t know, builds rapport, and helps build respect! It is also considered polite to say this if you approach someone, instead of just asking them for something or speaking to them directly.

Women and men should wear modest clothing. It is considered disrespectful to the mainly conservative Muslim inhabitants to see visitors walking around wearing clothing which reveal thighs, shoulders, bare backs or cleavage, except at beaches and hotels. Men should also not walk about bare chested or wearing very short shorts outside of hotels or beach resorts.

Cairo International Airport is the second biggest airport in Africa with more than 16 million passengers a year.

Cairo is home to Africa’s first and most expansive metro system. While Cairo’s metro system fully functioning is modern and sleek, there are three lines that cover most of the main districts of Cairo.

Wheelchair users, beware as many buildings have step-only access. Pavements are variable, even around the popular tourist attractions. There is often an incredibly steep drop from the curbs and where there are ramps they are better suited to pushchairs than wheelchairs. Expect potholes, gulleys, poorly cordoned-off building works and street works, and cars parked across the pavement, where there is a pavement at all.

What to see in Cairo. Best top attractions in Cairo, Egypt.

What to try in Egypt

What to eat-drink in Egypt

In Egypt, cell phones are a way of life. Walking down any street, or on a crowded bus, it seems that most Egyptians are addicted to cell phones (similar to what you may find in Japan or Korea). Instead of using your phone from your home country (which often tend to carry very high roaming fees), consider obtaining an Egyptian SIM card or cheap unlocked phone.

You can find mobile dealerships in every section of Cairo (frankly, you can’t avoid them), and getting set up is fairly easy.

Explore Cairo and visit the ancient monuments and get an idea of what it was like living back then in the ages of the pharaohs.

Watch a video about Cairo