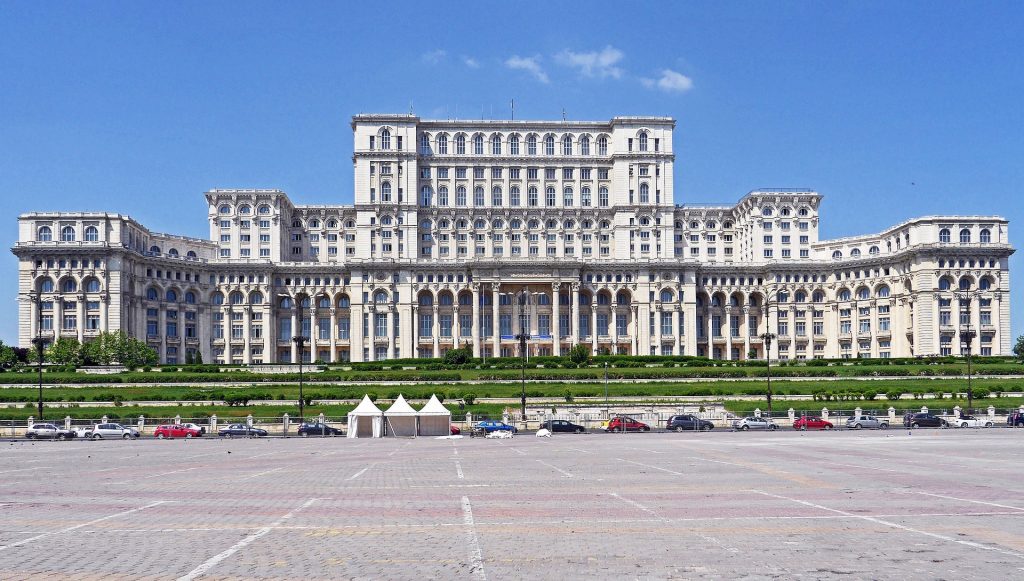 What to see in Bucharest, Romania

Parliament Palace – In the center of Bucharest, near Piaţa Unirii (Union Plazza), the tourist can see the largest parliament building in the world, formerly named “Casa Poporului” (People’s House). The building, which was built in 1984 by Nicolae Ceauşescu, spans 12 stories, 3100 rooms and covers over 330,000 sq m. 1/9 of Bucharest was reconstructed to accommodate this magnificent massive building and its surroundings. There are 30-45 minute tours every half hour which lead through the building’s vast collection of marble rooms and culminates in an impressive view from Nicolae Ceauşescu’s balcony. The marble and all the original decorations are 100% from Romania. There are different Tours ranging in price from 35 RON (18 RON for students, proof required) up to 55 RON (taking photos is another 30 RON). You have to show your passport in order to buy a ticket – an identity card will not be accepted. The basic tour includes the halls and the balcony, worthwhile is the terrace addition (10 RON) for the wonderful view from the top of the building. The basement addition on the other hand is not worth the extra 10 RON. They only show two rooms containing airducts, no additional facts and it lasts only 5 minutes! The tourist entrance is on the north side of the building.

Old center (Lipscani) – A part of the city’s historical heart was not demolished by Nicolae Ceauşescu. The area (stretching approximatively between the Dâmboviţa river to the south, Calea Victoriei to the west, Calea Moşilor to the east and Regina Elisabeta boulevard to the north) today contains an assortment of middle 19th century buildings, ruins of the Wallachian princes’ medieval court, churches, bank headquarters, a few hotels, clubs, restaurants and shops. Narrow cobblestoned streets retain the names of the ancient guilds that resided on them. The area was mostly renovated and is now a place of gathering for the young generation of the city.

Revolution Square (Piaţa Revoluţiei) – Site of part of the Romanian Revolution of 1989. Centrally located, it is not a long walk from the other squares, Gara de Nord, or the Parliament Palace. There is a tall monument in the center of the square in memory of those who died during the revolution.

The Arch of Triumph (Arcul de Triumf). – Situated in the norhern part of the city, close to Herăstrău Park. The current arch was inagurated in 1936, but on the same site other arches stood starting with 1878.

Romanian Atheneum – A beautiful building situated near Revolution Square (Piaţa Revoluţiei) is home of the George Enescu Philarmonic. If you have the time, visit the interior of the building as well, as it holds a fresco that depicts scenes of the Romanian history. The building was inagurated in 1888.

WWII American Memorial – Small memorial dedicated in 2007. Located in the eastern area of the Kiseleff Park (Parcul Kiseleff). It is visible on the western side of the Bulevardul Aviatonlor between the “Institutul de Istorie Nicolae Iorga al Academiei” and Strada Ion Mincu.

Village Museum –an original open air museum created in 1934, it currently has around 300 traditional buildings (including churches, workshops, mills etc.) plus furniture, pottery, clothing gathered from villages in every region of the country in an effort to showcase the traditional way of life of the Romanians. Occasionally hosts folkloric and traditional crafts festivals. Entry fee 10 Lei for an adult, 5 Lei for student, closes at 9PM in the summer. Şoseaua Kiseleff, 28-30.

Museum of the Romanian Peasant, also dedicated to the traditional way of life, it focuses mainly on traditional interior decoration, tools, clothing and artifacts. Again, it sometimes hosts folkloric and traditional crafts festivals. Very interesting, touching exhibit about one’s grandma. With hidden rooms to surprise you. Has a quite decent cafe, a notable museum shop, and a Cărtureşti bookstore. Entry 6ron for adult, 3ron for student. Şoseaua Kiseleff, nr. 3

Art Museum, in the building of the former Royal Palace, has collections of ancient, modern and contemporary Romanian art as well as exhibitions of rare European art dating as early as the 14th century. Calea Victoriei, nr. 49-53

Museum of Art Collections, recently reopened, as an art museum is second only to the museum in the former palace, especially (but not exclusively) for the works of Romanian artists. Calea Victoriei, nr. 111

National Museum of Contemporary Art. Recently opened inside a converted wing of the Palace of the Parliament, in what had been the private apartments of Ceauşescu, the museum features fresh exhibitions from Romania’s burgeoning art scene.

“Curtea Veche” (Old Court) Museum –the ruins of the crown palace of the Wallachian princes, some parts dating as early as the 16th century. It’s around an earlier fortification located in this same place that Bucharest began to develop.Strada Franceză, nr. 25-31

Cotroceni Palace Museum –has collections of objects that belonged to the former Romanian royal family. Today it is also the residence of the Romanian presidents.Bd. Geniului, nr. 1

National History Museum -located in a neoclassical late 19th century building, has exhibits documenting the evolution of society on Romania’s territory from the Paleolithic until today, a replica of Trajan’s Column in Rome and a very interesting numismatics collection. It is undergoing some remodeling and only two exhibitions are open to the public as of June 2009. Calea Victoriei, nr. 12

Bucharest History Museum –situated in the Şuţu Palace, built in 1834, has collections related to the development of Bucharest from a small 14th century fortress into Romania’s capital.Bd. I.C. Brătianu, nr. 2

Military History Museum –has collections of weapons dating since the prehistoric times and permanent exhibitions dedicated to important military events, including the Romanian revolution of 1989, as well as an outdoor exhibit of relatively modern weaponry, including cannons, tanks, helicopters etc.Strada M. Vulcănescu, nr. 125-127

Jewish Community History Museum –documenting the life of this community in the region since ancient times, through the Holocaust, and beyond. Includes quite a good art collection. Strada Mămulari, nr. 3

“Grigore Antipa” Natural History Museum –has over 300.000 exhibits illustrating the transformations of Earth and the evolution of species. Şoseaua Kiseleff, nr. 1

Geology Museum –has a large collection of minerals, rocks and fossils.Şoseaua Kiseleff, nr. 2

Future Museum, a newly established platform based on a system of open call commissions. All artists and curators based in Romania and Moldova are invited to submit project proposals which will be selected by an international board. The ethos of the museum is a belief in unexplored concepts, uncharted intentions, unknown phenomena, undiscovered schemes and unprecedented theories. Ion Ghica, nr. 11

Curtea Veche (Old Court) Church –built around 1559, used to be the coronation church of the Wallachian princes.Near Piata Unirii.

Patriarchal Cathedral (1658) and Mitropoliei Palace (1708) –the residence of the Orthodox Patriarch, sort of a small Romanian Vatican.Located on the hill overlooking Piata Unirii.

Stavropoleos Church –built in the early 18th century, has some stunning decorative sculpture and amazing frescoes. A little jewel. In the old center area.

Sfântu Gheorghe Nou (New St. George) Church –dating from the 18th century, houses the tombs of the princes Constantin Brâncoveanu and Ion Mavrocordat. At half way between Piaţa Universităţii and Piaţa Unirii.

Kretzulescu Church –another interesting example of the Brancovenesc style (1722). On the left side of the National Art Museum.

Plumbuita Monastery –built in the last half of the 16th century, it once housed the first printing house in the region (1582); today has a religious objects museum and a large park. Relatively far from the city center, on Şoseaua Colentina.

Oţetari Church – The Oţetari Church is a very discreet, yet spiritual place, giving some religious comfort in the centre of the city. Its name actually means “cruet”, because of the initial destination of the street it is situated on. It was built in the 18th Century and it features a number of interesting paintings and stained glasses. Close to the Rosetti Square, National Theatrer and the Spiru Haret National College.