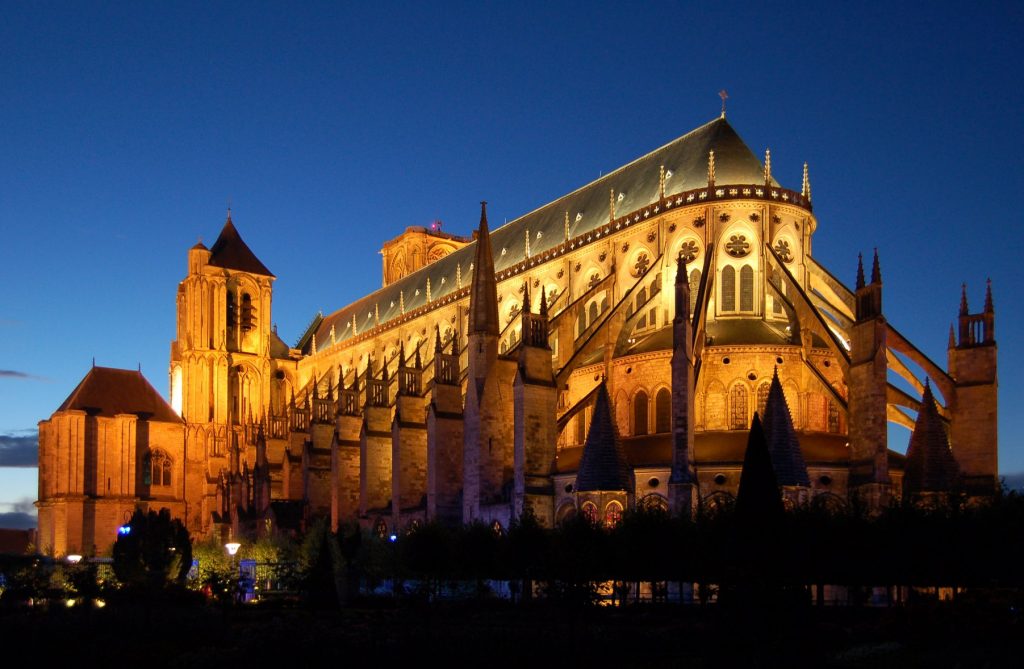 Explore Bourges a city in Centre region, France. Most parking in the historic center is metered. However, there are large free car parks just outside the centre if you’re prepared to make a five minute walk. The historic centre is small enough to walk around, and that’s definitely the best way to see it.

What to see in Bourges, France. Best top attractions.

The cathedral of Saint Etienne, a UNESCO heritage site, dates from about 1200-1255. It’s an exceptionally fine and most original work of French Gothic architecture, with double aisles and an immensely high nave. It has preserved almost all the original stained glass of its ambulatory, and some of the high windows of the choir. There are also some lovely later windows in the side chapels. The crypt and towers can be visited for an extra charge.

The Palais de Jacques Coeur was built from 1443-1450 by Jacques Coeur, the richest man in France and banker to Charles VII. It’s a flamboyant work, highly decorated and punctuated by stair turrets and towers just like the castles in the Tres Riches Heures du Duc de Berry – another Bourges inhabitant. The interior can only be visited on a guided tour, for which a charge is made.

The Marais, to the north of the historic centre, is an area of allotment gardens divided by canals. A walk all the way round will take you 2-3 hours and give you excellent views of the cathedral. Go at a weekend and you’ll probably see some of the gardeners punting through the canals to their plots.

The whole city is full of lovely houses, some in half timber, others in the light stone that is characteristic of Bourges. Rue Bourbonnoux and Rue Coursalon are particularly worth visiting.

Musee de Berry – a free museum of local traditions, in another medieval mansion.

Musee des Meilleurs Ouvriers de France – this museum, opposite the cathedral, displays works of craftsmanship which have been made for the MOF diploma. Currently it has a display of fine hand-made knives in the exhibition room. Free entry, and worth a look.

You should take a boat trip round the Marais.

You can go to the ‘Plan d’eau’ which is an artificial lake to have a 6km-walk. It’s also possible to use your bicycle or rollers around it on a lane separated from the road – it’s relatively flat.

In April, there is a music festival called ‘Le Printemps de Bourges’ where, during around 1 week, around 30 “official” concerts (prices varies) are given in the city (in several places, sometimes at the same time). The program may be fetched in early March. During this period, most of the pubs and bars also have bands playing (for free) and the whole city gets a lot of animation.

Most shops are located in the centre of the town localized by rue Moyenne.

One of the specialties of Bourges is the Forestines which is a kind of candy. You can find such in the ‘Maison de la Forestine’ (located rue Moyenne).

Warning! Almost everything is closed on Sunday, though you will find a couple of pizza restaurants in Place Gordaine.

Place Gordaine and the area by the market have cheap shawarma, couscous, and a number of French restaurants. More chi-chi places and a fine Breton creperie can be found on Rue Bourbonnoux.

Feel free to explore Bourges and the near by cities

Watch a video about Bourges