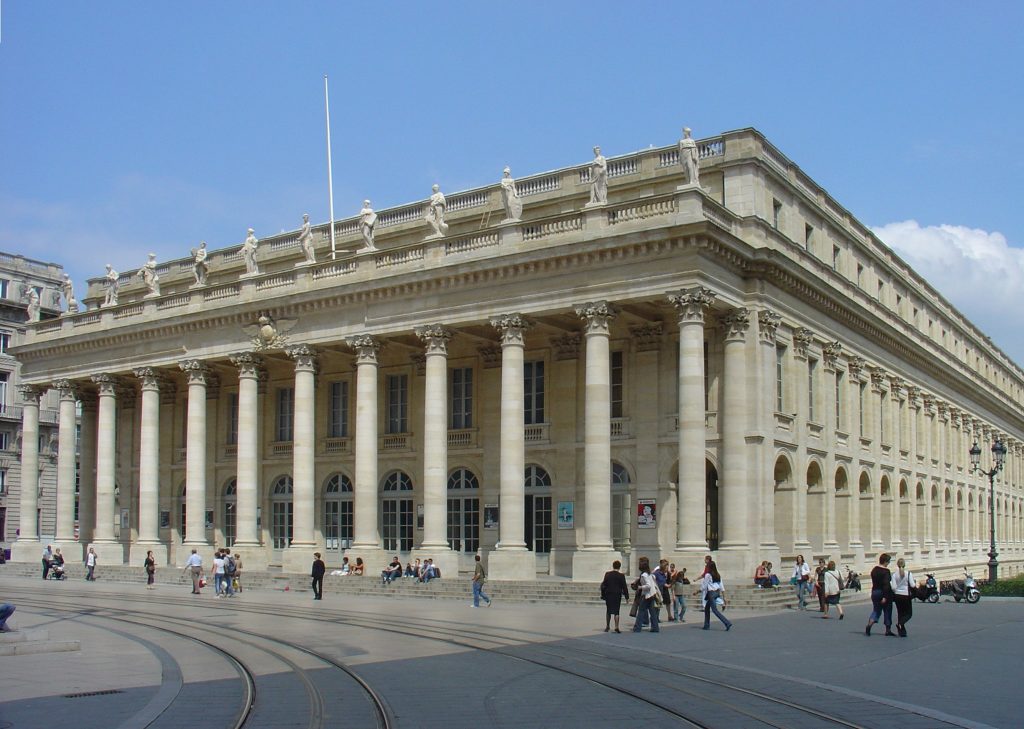 Explore Bordeaux, famous for its wine but is also a bustling city with lots of historic sights to discover. It is listed as a World Heritage Site for being “an outstanding urban and architectural ensemble”. Lyon, the country’s second largest city, is listed too, and boasts a beautiful old centre as well as a number of Roman ruins. Strasbourg, one of the EU headquarters, has a character of its own, with clear German influences. Montpellier is one of the best places in the south, with lots of monumental buildings and nice cafés. In the west there’s the beautiful historic city of Nantes, home to the Château des ducs de Bretagne and many other monuments. The Capitole de Toulouse is situated right at the heart that famous university city’s street plan. Last but not least, don’t overlook Arles, with its World Heritage Listed Roman and Romanesque Monuments.

You’ll be raising your glass many times in Bordeaux, which is renowned for its wines, considered amongst the best in the world. As the capital of the department Gironde in the region Aquitaine, it has one million inhabitants in its metropolitan area. After years of neglect, the former wet docks are the country’s new hot spot, with a number of cafés, gardens, and museums springing up all the time. A lively university community of over 60,000, (Bordeaux Campus is the largest in France) establishes that Bordeaux is about more than just wine.

Bordeaux is considered a very tolerant and relaxed. The cultural, artistic, and music scenes are very vibrant. The city was ruled by the English for a long time, which is why Bordeaux seems to have an “English flair”.

Bordeaux is often referred to as “Little Paris” and the rivalry between the “Bordelais” and “Parisiens” is a hot subject, so you may experience some heated arguments on the subject during your stay.

Geography Bordeaux is a flat city, built on the banks of the Garonne River. It is also the largest French city by area and geographically one of the largest in Europe. The Garonne merges a dozen kilometers below the city with another river, the Dordogne River to form the Gironde Estuary, which is biggest estuary in France.

The city centre is located west and south of the Garonne. To the east are a few hills – the only ones in the vicinity. These hills mark the beginning of an industrial zone and suburbs. Because it is a flat city, bicycles make excellent modes of transport, especially as the city has more than 580 km of cycle tracks. Bordeaux is among the most economically dynamic cities in France.

Due to the weakness of the subsoil, there are no skyscrapers in Bordeaux, which explains its sprawl. The centre of the town has retained its traditional stone mansions and smart terraces, hence the reason behind the city being called “Little Paris”.

Modern buildings can be found to the west (administrative centre) and south (university) of the city.

You can reach Bordeaux By plane. Bordeaux-Mérignac Airport is west of the city. It is a regional airport which serves mostly domestic flights, though there are international flights as well connecting Bordeaux to some European “hub” airports like Paris (Orly and Roissy), London (Gatwick and Luton), Madrid, and Amsterdam.

Bergerac Dordogne Périgord Airport is served by a number of airlines. As of 2017, the airport is not served by any public transport.

From Paris Charles de Gaulle Airport there are TGV high-speed train services from the railway station which is adjacent to Terminal 2 to Bordeaux Saint Jean station. The quickest journey time for a direct train is 3 hrs 33 mins.

The main train station (Gare Saint Jean) is located about 4km from the centre of town. Several trains per day (around one every two hours) go north (to Paris, about 2 -3 hours, 25 trains a day , Angoulême, Poitiers), south (to Toulouse, Marseille, Montpellier (about 4 to 5 hours), up to Nice), and east (to Périgueux and Clermont-Ferrand).

Bordeaux is quite a big city; however, most of the interesting attractions are in the town centre. It is not recommended that visitors drive as it is always a hassle to park, and there are often traffic jams in the narrow, old streets of the city.

The most interesting way to explore the city is by walking. As most of the town centre is a ‘pedestrian area’, this is easy to do. If you like sports, you can rent roller-skates or a bike or you can make your way in town using the various bus lines. A small ferry boat permits to go from the western shore of the river to the eastern shore, and vice-versa.

Three efficient tramway lines are also available (A, B, and C), tickets cost 1.50€ and covers unlimited journeys within one hour of validation. The machines do not accept notes so you will need a French Carte Bancaire or coins.

Bordeaux is a historic city with many tourist attractions. The main districts are briefly presented here, which are listed according to their distance from the railway station.

Do not miss the Victory Arch (Roman architecture), at the centre of La Vicroire

and a great example of the town’s Roman roots.

Relax and take a picnic in the lush Public Gardens, north of Gambetta square.

The Girondins memorial on the Quinconces square is a fitting tribute to the Members of Parliament from Gironde who were guillotined by Robespierre.

What to do in Bordeaux, France

Have a walk along the Sainte-Catherine street in the Pedestrian Centre and enjoy the scenery.

Consider crossing the bridges or taking the ferry boat over the river (see Les Quais).

Climb the 243 steps of the tower of Saint-Michel, and enjoy the panoramic view of Bordeaux (entrance 5 Euro – free for EU nationals under 26).

Spend some time at the miroir d’eau (water mirror) at the border of the river. Every now and then, it is filled with 2 cm of water, alternated with a cloud of mist.

Have a drink and a dance at one of the many bars or clubs in Les Quais or La Victoire.

Watch the ducks play in the big public park north of the centre and escape from the city at the Jardin Botanique, Bordeaux’s Botanical Garden. Around since 1855, the botanical garden is the perfect place to take a walk around its many paths, or just sit and relax. Guided tours are on offer, as well as occasional workshops and activities for children.

Fly a jet fighter. You can fly the L39 Albatros from Bordeaux International Airport. Starts at €1950.

SuperCar RoadTrip. Organizes private road trips near Bordeaux. Discover the most beautiful vineyards of Bordeaux aboard luxury convertible cars: Ferrari, Lamborghini, Jaguar and Mercedes AMG. Drive yourself with the person of your choice. An unforgettable experience.

Musée du Vin et du Négoce, 41 rue Borie 333000 Bordeaux (down a narrow street, tram stop: Chartrons),  10am-6pm. The petit Museum of Bordeaux Wine and Trade takes place in the building of an old wine merchant. Visitors can discover the history of the wine trade with artifacts, videos and a guided tour (by reservation) followed by a personal wine tasting and presentation of wines of the region by one of the multilingual staff. 5-7 euros.

Touring the vineyards and sampling the local wines are one of the greatest pleasures when visiting Bordeaux. It is the second largest wine-growing region in the world and produces over 800 million bottles annually. It produces some of the best and most prestigious wines in the world, some of the most famous being:

Tours are available through many operators. Alternately, call ahead for reservations. Note that Latour generally only accepts serious collectors and professionals.

There are daily wine tours departing from Bordeaux and that head towards all the major vineyards of the region: Canon Fronsac,Saint Emilion, The Médoc, Graves and Sauternes.

The annual summer wine festivals are held in tandem with the “Bordeaux-fête-le-fleuve” celebrating the river, land, and international community.

There are many tour operators for this region of France. They can organize your complete tour (including travel to and from Bordeaux and France) or they can arrange visits to wineries and château for you.

Bordeaux has made its wealth out of trade, and the local economic system relies heavily on shops and trading halls. The Pedestrian Centre is basically full of stores of all kinds, from clothes to art, craftworks, food and wine etc. If you’re looking for luxury items, head to Gambetta square and its surroundings.

Clothing is less expensive than Paris, so wear comfortable shoes and head to Rue Sainte Catherine, the longest pedestrian precinct in Europe and the best place for shopping.

Of course, you can hardly leave Bordeaux, without taking home some of its beloved wine. Make sure you’re aware of the customs rules at the airport.

Gastronomy has a very important place in the city, which is full of restaurants of all kinds. French restaurants provide dishes from almost every part of the country, and there are a lot of Asian, African or Arabian restaurants. Generally, walking along Rue de Saint Remi is much suggested. It is officially the street of restaurants of Bordeaux, ending from one side to Miroir de l’eau and to other side to Saint Catherine Street. It’s so very close to the most touristic parts of city and easy to reach by tram.

Bordeaux is lively during the day and continues throughout the night. If you’re looking for a bar to hang out with friends or to enjoy watching a football match, head for La Victoire, as most of the pubs and bars of the town are here. Virtually, all the shops in the surroundings of this area are bars, and you’ll likely be able to find one that suits your needs.

If you prefer dancing or clubbing, most of the night-clubs are on the Quais, near the train station. From rock to disco, dance to techno, you also have a lot of choice.

While the entrance is free to the majority of the clubs, don’t get there drunk or you will not be let in.

What to see. Best top attractions in Bordeaux, France.

To reach those places, you can use either the regional railways (TER) or inter-city bus lines. By car, all these areas are less than an hour from Bordeaux.

The whole region is covered with well organized bike or walking trails which let you explore Bordeaux and its countryside.

Watch a video about Bordeaux