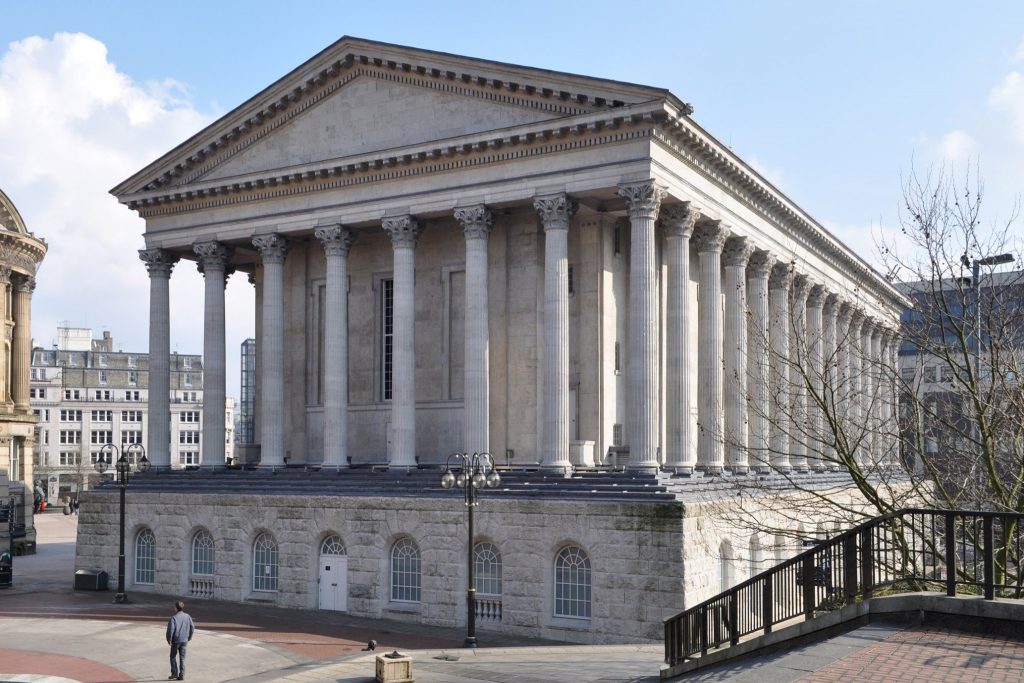 A market town in the medieval period, Birmingham grew in the 18th-century Midlands Enlightenment and subsequent Industrial Revolution, which saw advances in science, technology, and economic development, producing a series of innovations that laid many of the foundations of modern industrial society. By 1791 it was being hailed as “the first manufacturing town in the world”. Birmingham’s distinctive economic profile, with thousands of small workshops practicing a wide variety of specialized and highly skilled trades, encouraged exceptional levels of creativity and innovation and provided an economic base for prosperity that was to last into the final quarter of the 20th century. The Watt steam engine was invented in Birmingham.

From the summer of 1940 to the spring of 1943, Birmingham was bombed heavily by the German Luftwaffe in what is known as the Birmingham Blitz. The damage done to the city’s infrastructure, in addition to a deliberate policy of demolition and new building by planners, led to extensive urban regeneration in subsequent decades.

Birmingham’s economy is now dominated by the service sector. The city is a major international commercial center, ranked as a beta- world city by the Globalization and World Cities Research Network the joint highest ranking with Edinburgh and Manchester of all British cities outside of London; and an important transport, retail, events and conference hub.

Birmingham is the fourth-most visited city in the UK by foreign visitors.

Birmingham’s explosive industrial expansion started earlier than that of the textile-manufacturing towns of the North of England, and was driven by different factors. Instead of the economies of scale of a low-paid, unskilled workforce producing a single bulk commodity such as cotton or wool in large, mechanized units of production, Birmingham’s industrial development was built on the adaptability and creativity of a highly paid workforce with a strong division of labor, practicing a broad variety of skilled specialist trades and producing a constantly diversifying range of products, in a highly entrepreneurial economy of small, often self-owned workshops. This led to exceptional levels of inventiveness: between 1760 and 1850 – the core years of the Industrial Revolution – Birmingham residents registered over three times as many patents as those of any other British town or city.

The demand for capital to feed rapid economic expansion also saw Birmingham grow into a major financial center with extensive international connections. Lloyds Bank was founded in the town in 1765, and Ketley’s Building Society, the world’s first building society, in 1775. By 1800 the West Midlands had more banking offices per head than any other region in Britain, including London.

There are 571 parks within Birmingham – more than any other European city – totaling over 3,500 hectares of public open space. The city has over six million trees, and 400 kilometers of urban brooks and streams. Sutton Park, which covers 2,400 acres in the north of the city is the largest urban park in Europe and a National Nature Reserve. Birmingham Botanical Gardens, located close to the city center, retains the regency landscape of its original design by J. C. Loudon in 1829, while the Winterbourne Botanic Garden in Edgbaston reflects the more informal Arts and Crafts tastes of its Edwardian origins. Birmingham has two major public art collections. Birmingham Museum & Art Gallery is best known for its works by the Pre-Raphaelites, a collection “of outstanding importance”. It also holds a significant selection of old masters – including major works by Bellini, Rubens, Canaletto and Claude – and particularly strong collections of 17th-century Italian Baroque painting and English watercolors. Its design holdings include Europe’s pre-eminent collections of ceramics and fine metalwork. The Barber Institute of Fine Arts in Edgbaston is one of the finest small art galleries in the world, with a collection of exceptional quality representing Western art from the 13th century to the present day.

Explore Birmingham at night when those interested in the vivid nightlife are mainly concentrated along Broad Street and into Brindley place. Although in more recent years Broad Street has lost its popularity due to the closing of several clubs; the Arcadian now has more popularity in terms of nightlife. Outside the Broad Street area are many stylish and underground venues.

Watch a video about Birmingham, UK