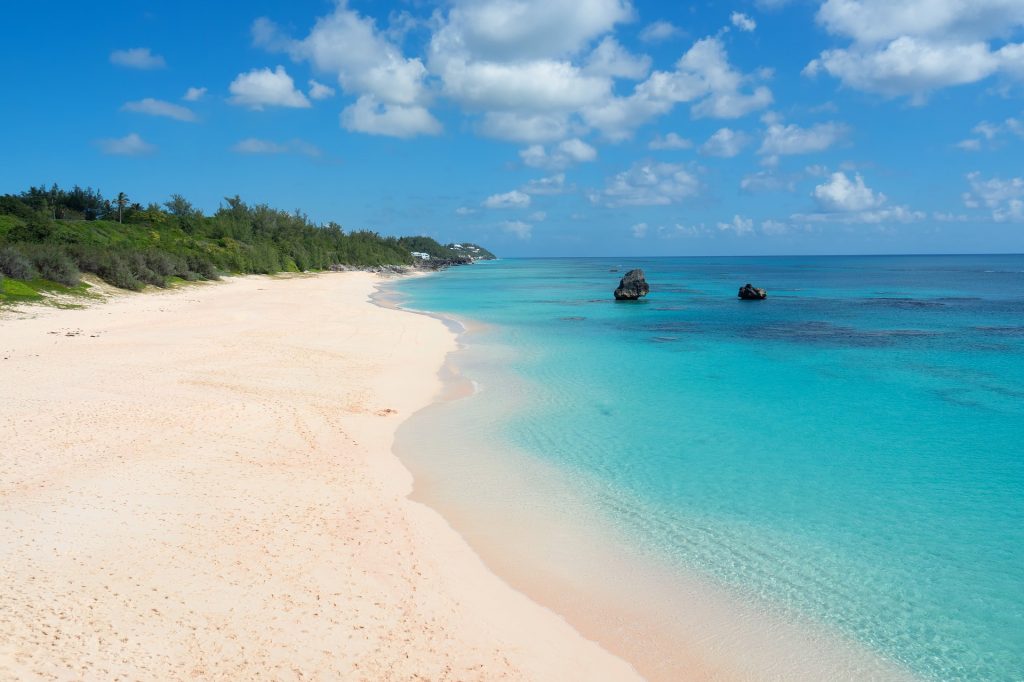 Bermuda is a self-governing British overseas territory in the Atlantic Ocean north of the Caribbean, off the coast of North America east of South Carolina. Explore Bermuda, one of the last remains of the once vast British colonial empire in North America.

Hamilton, in Pembroke Parish, is Bermuda’s administrative center and largest city. It boasts a large quantity of museums, some fine buildings and architecture. It boasts a fine Anglican cathedral of the Most Holy Trinity. There are numerous forts, fortifications and bits of Royal Naval heritage. There are cinemas, a variety of shops, bars, hotels and restaurants. The city is also blessed with markets, gardens, stalls, beaches, squares and plazas with wide streets, boulevards and walkways.

Bermuda consists of about 138 islands and islets, with all the major islands aligned on a hook-shaped, but roughly east-west, axis and connected together by road bridges. Despite this complexity, Bermudians usually refer to Bermuda as “the island”. In terms of terrain, the islands are composed of low hills separated by fertile depressions, and interspersed with a complex set of waterways.

Bermuda has a subtropical climate, with hot and humid weather from spring through fall.

Bermuda was first settled in 1609 by shipwrecked English colonists headed for the infant English colony of Virginia. The first industry on the islands was fruit and vegetable cultivation to supply the early American colonies.

Tourist travel to Bermuda to escape North American winters first developed in Victorian times. Tourism continues to be important to the island’s economy, although international business has surpassed it in recent years, turning Bermuda into a highly successful offshore financial centre.

The airport is situated in St. George’s Parish, adjacent to Castle Harbor, and nearer St George’s than Hamilton (though no part of Bermuda is far from any other).

Bermuda receives many visits from cruise ships during the summer months.

Bermuda is a favorite, if challenging destination for off-shore yacht crews. Crossing from the US mainland or the Azores can take up to 3 weeks in the notorious calm of summer. The rest of the year there might be too much wind: nor’easters to hurricanes. Another hazard: lots of floating debris from sunken ships and the hurricanes of the the last few years. Within a 200 nautical mile radius from Bermuda collisions with solid objects are frequent and often deadly.

The islands benefit from an excellent and frequent bus service, which connects all parts of the islands to Hamilton. The buses are air conditioned and used equally by locals, visitors, and cruise passengers.

Until the arrival of the US military during the second world war, cars were entirely banned from these islands. Even now, hire cars (rental cars) are banned and only residents are permitted to own cars – limit one per household! Motorized bicycles or mopeds are available for hire and heavily used by locals and visitors alike. Depending on where you are staying, a moped may be your best way to get around. If you wish to use mopeds, rentals are very common, regulated and priced competitively.

Travel is on the left side of the road. Road signs are based on the ones used in the United Kingdom; however, the vast majority is in kilometers. The national speed limit is 35km/h, which is lower in built-up and other congested areas.

What to see. Best top attractions in Bermuda.

Bermuda has many golf courses and driving ranges spread out along its length.

Bermuda has many examples of large fortifications and smaller batteries spread throughout the island which were built between 1612 after first settlement and manned until 1957. For its small size the island had approximately 100 fortifications built. Many have been restored, primarily the larger ones, and are open to the public with dioramas and displays. Many have their original cannons in place. Some lie on outlying islands and islets and can only be accessed via boat, or have been incorporated into private properties and resorts. Some of those which can be accessed are:

Located in Hamilton, this public park is the home to many concerts in the summer months on the bandstand, which was established in 1899 and completely restored in 2008. Visit one of the several flower gardens, walk on the paths or sit on one of the many benches under the trees. Public restrooms are available nearby and the location is prime, between several of the busy streets of the capital. In the summer, expect frequent concerts on the bandstand during the day and into the evening hours, food vendors, and other attractions for both adults and children. Conveniently for tourists, the main bus station of the city is located one block over from the park. Open daily sunrise to sunset.

The Devil’s Hole aquarium, located in Tucker’s Town, has since closed, leaving the Bermuda National Aquarium and Zoo as the sole aquatic life centre in Bermuda. Expect to see a variety of water and land animals nursed back to health after being found in danger on the shores of Bermuda. This zoo/aquarium is unique because visitors can walk into the habitats of the animals due to the small nature of the facility.

US dollars are accepted everywhere in Bermuda.

Bermuda offers ATMs in several tourist locations, including the airport, St. George, Somerset, and Hamilton. Most banks have ATMs as well. Some ATMs dispense US dollars; this will be clearly marked on a sign on or above the machine. Otherwise, it will dispense Bermuda dollars.

Though MasterCard and Visa debit and credit cards are frequently accepted, it is common for smaller hotels and bed and breakfasts to not accept them. Before booking, check with the hotel or bed and breakfast in order to ensure they accept credit cards if you plan to pay this way. Though most stores accept cards to accommodate tourists, many hotels and even larger resort areas do not. Gratuities are typically paid in cash as well.

A nice assortment of stores exists in Hamilton, especially on Front Street. The area can be explored easily by foot. Front Street, is one of the main shopping streets, and is facing the harbor. Shopping can also be found in the easily walked town of St George as well as in Dockyard, which has a small shopping mall. Smaller stores can be found throughout the island offering a variety of goods.

What to eat and drink in Bermuda

Two relatively unique Bermudian dishes are salted codfish, boiled with potatoes, the traditional Sunday breakfast, and Hoppin’ John, a simple dish of boiled rice and black-eyed peas. Shark hash was made, fish cakes were traditional on Fridays, hot cross buns at Easter, and cassava or farina pies at Christmas. With the high-end tourist market, great effort has been expended by hotel and restaurant chefs in developing an ostensibly ‘traditional Bermudian cuisine’, although this has usually meant adapting other cuisines, from West Indian to Californian, in line with the expectations of visiting clientèle. Most pubs serve a typical British Pub fare, although the number of these establishments has diminished as premises are lost to development, or establishments are redeveloped to target the tourist market. While lobster and other sea foods are often featured on the menu, virtually everything is imported from the US or Canada. If you want local fish, ask or look for “local” as opposed to “fresh.”

Restaurants can be found all over the island, with the largest concentration in the city of Hamilton and St George town. Also, there are several at some of the hotels and resorts which can be outstanding (or not) and pricey.

NOTE: Gratuity is included in the bill (15% or 17%) depending on the restaurant, so check your bill to avoid accidently tipping twice.

Rum Swizzle which is a rum cocktail made of Demerera Rum (amber rum) and Jamaican Rum (dark rum) along with an assortment of citrus juices. Sometimes brandy is added to the mixture as well. Note, it is quite strong. According to local lore, it was named after the Swizzle Inn where it was said to be developed.

Both drinks are comparatively very sweet.

The official language is English. Portuguese is the second most widely spoken language.

It is considered good manners when greeting someone, a shop assistant or the Premier, to say “good morning”, “good afternoon” or “good evening” and to do the same when leaving them. This applies even in situations where you are the customer, such as when catching the bus or entering a store. It is considered rude and abrupt to ask a question or make a statement without first greeting them. Try to avoid talking about politics or religion unless you know the person very well.

Most Bermudians are very accommodating when it comes to helping out or answering any questions a visitor may have. Just stop someone on the street, or pop into any shop and ask. Explore Bermuda and you will not regret it.

Watch a video about Bermuda