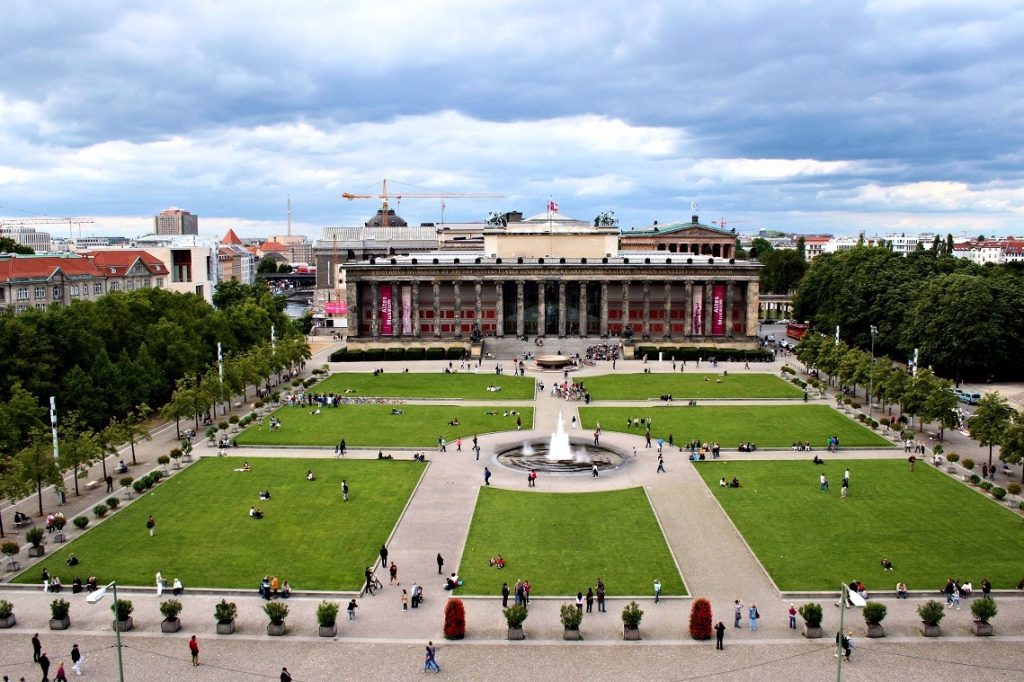 What to do in Berlin, Germany

Go on a Tour of Berlin – the Mitte and surrounding districts are sufficiently compact to allow a number of excellent walking tours through its history-filled streets. You’ll see amazing things you would otherwise miss. Details are usually available from the reception desks of hostels and hotels.

Berlin has many great parks which are very popular in the summer. Green Berlin operates some of them.

Tiergarten is Berlin’s largest park. In the summer and on weekends you will see loads of families with their barbecues.

Tempelhofer Park Once an Airport, but that closed in 2008. It’s now open to the public. You can do all kinds of activities on the former runways, like flying a kite or driving a skateboard. The park is large at 303 hectares (3,030,000m²).

Schlossgarten Charlottenburg is inside the area of the Charlottenburg Palace, but the green area of the park is free, so you can go there to have a walk even if you are not interested in the palace. It covers a large area and you can get in from the entrance just near the “New Pavillon” (Neuer Pavillon also known as Schinkelpavillon) placed on the right of Luisenplatz. Also contains a royal mausoleum, resting place of the first German emperor, Kaiser Wilhelm I, and his wife Augusta.

World’s Garden (Gärten der Welt) in Marzahn. Inside you can find a large, well-established Chinese garden, a Korean garden, a small Bali’s Garden/Glasshouse, an Oriental Garden with nice fountains and a cloister and a Japanese garden which is a project by the city partnership of Berlin and Tokyo. Open daily 09:00-16:00, in April and October until 18:00, from May-September until 20:00. Best time for a visit is in spring or summer.

Wannsee is called Berlin’s “bath tub”. The Strandbad Wannsee is the most famous bathing area for locals.

Müggelsee in the south east of Berlin is a popular swimming spot.

Berlinale – Berlin Film Festival. The city’s largest cultural event and an important fixture in the global film industry’s calendar (up there with Cannes). 250,000 tickets sold, 400 different films screened and a host of associated parties and events every year. In contrast to e.g. Cannes, all screenings at the Berlinale are open to the public. Tickets are inexpensive and relatively easy to get for the “International Forum of Young Film” screenings and the “Berlinale Panorama” (movies which are not in the competition).

Lange Nacht der Museen. A large cultural event (August 26, 2017) with museums open until 2AM and extra events around the city.

Fête de la Musique. 21 June. All kinds of music around the city on this day coordinating with a similar day in several French cities.

Oberbaumbrücke Festival, (just under the Oberbaumbrücke). In August (check the exact dates). Artists are selling their works, amateur tango dancers are giving public performances and you can contribute to a collaborative painting on a very long canvas spread on the street along the festival.

Festival of Lights – yearly in October. Famous buildings are illuminated in a special way free.

Christopher Street Day, 21st June 2014 – as the Germans name their gay prides – is a well-known annual political demonstration for the rights of the gay culture organized in all major German cities. Even if you are indifferent about the issue, the Christopher Street Day is usually a worthwhile sight as many participants show up in wild costumes.

Hanf Parade in no man’s land. August. The Hanfparade is the biggest European political demonstration for the legalization of hemp for use in agriculture and as a stimulant.

Karneval in late February or early March. As a lot of people in Berlin originally came from the southern or western area of Germany where Fasching, Fastnacht or Karneval is celebrated, a carnival parade was also established in Berlin. It grew bigger and bigger (about 500.000 to 1 million people watching), but the costumes and cars are rather boring and the people are not as dressed up as in the “original” big carnival parades (Cologne, Mainz, Düsseldorf). Since 2007 the traditional route across Kurfürstendamm was chosen.

Karneval der Kulturen in May or June (on Whit Sunday). The idea of the “Carnival of Cultures” is a parade of the various ethnic groups of the city showing traditional music, costumes and dances. Other more modern, alternative and political groups also participate. Similar events are also held in Hamburg and Frankfurt.

Deutsches Theater. Classical theatre with an impressive line up of actors and directors.

Friedrichstadt-Palast. Berlin’s biggest show with over 100 artists on the biggest theater stage in the world.

Staatsoper Unter den Linden. The impressive building and royal history make the building alone worth a visitSchiller Theater in Berlin-Charlottenburg.

Neuköllner Oper. Voted several times best off-opera house and known for its modern and contemporary pieces. Mostly in German as usually relating to developments in Germany. Very creative and innovative.

Philharmonie. Berlin Philharmonic orchestra is one of the best in the world. Famous building and outstanding musicians make a reservation essential. Cheaper tickets are usually available 2-4 hours before the concert if not sold out.

There are about a hundred cinemas in Berlin, although most of them are only showing movies dubbed in German, without subtitles.

Berlin offers a range of photographic opportunities, particularly with its urban street scenes.

In Berlin you can do virtually all sports

The most popular sport is football, which is played all over the city. The Berlin FA  lists all the clubs. Not to be missed is the Olympic Stadium, which hosted the 2006 world cup final. Hertha BSC Berlin, Berlin´s highest professional football team, plays there during the Bundesliga season in spring, fall and winter. There is also the F.C.Union Berlin which plays at Stadion An der Alten Försterei which plays in Bundesliga 2.

Basketball: Alba Berlin, known as The Albatross are consistently the best basketball team in Germany, and one of the best in Europe. With fans crazier than most in the NBA, Albatross games at the o2 World arena are an exciting way to take in one of the world’s greatest sports.

Volleyball The Berlin Recyling Volleys are the current German champions.

Public swimming pools can be found around the city. Check out BBB for pool listings and opening times.

Sailing on one of the many lakes is also popular. You can find sailing clubs and most universities have ships as well.

Golf is popular as well. You can find golf clubs all around Berlin, although for non-members Motzen has one of the best.

Ice hockey: The Berlin Eisbären (Polar Bears) play this fast, exciting and very physical sport during the winter. The excitement is heightened by the singing and chanting of the crowds, who are fueled by the copious quantities of wurst and beer available.

Floorball is booming faster than ever before in the German capital. A sum of teams defines the cascade of the local floorball scene, whereas the decorated Bundesliga site of BAT Berlin probably embodies the most prominant one.

American Football: After the closing of NFL Europe and the related end of Berlin Thunder (triple winner of the World Bowl), the Berlin Adler (Eagles) are Berlin´s No. 1 team playing in German Football League.

Spas are very trendy and a massage can give you new energy after walking around and traveling.