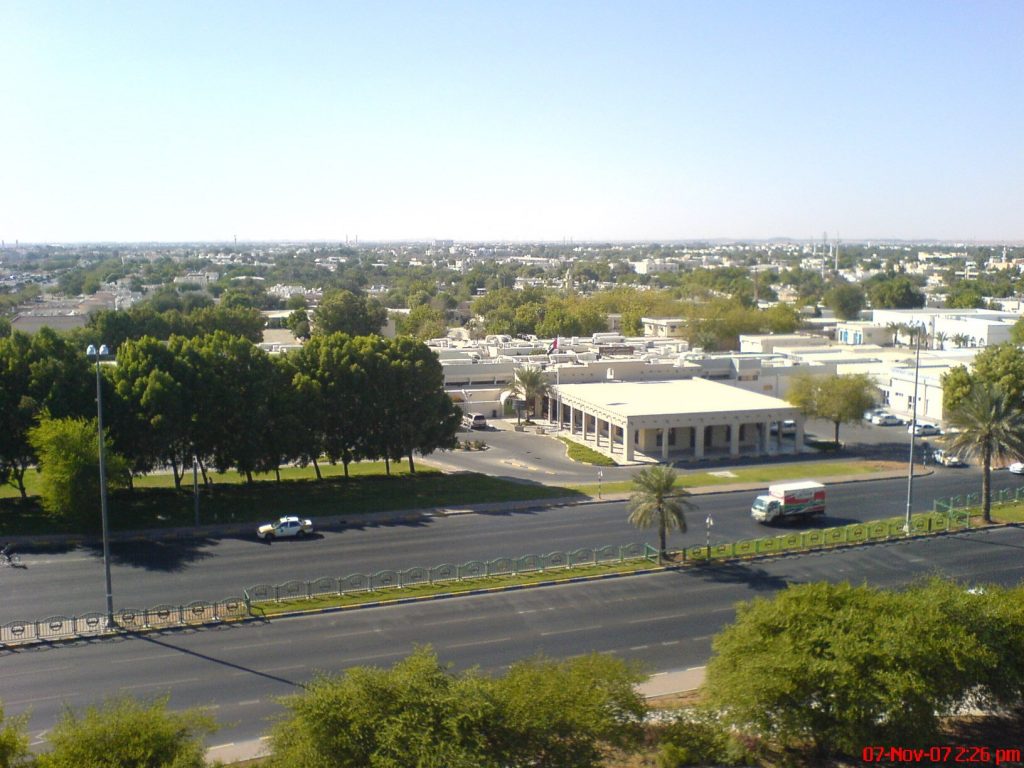 Explore Al Ain the Garden city of United Arab Emirates. This oasis town is located next to, and virtually merged with, the Omani town of Buraimi. Al Ain, literally The Spring is a city in the Eastern Region of the Emirate of Abu Dhabi, on the United Arab Emirates’ border with Oman, adjacent to the town of Al-Buraimi. It is the largest inland city in the Emirates, the fourth-largest overall (after Dubai, Abu Dhabi, and Sharjah), and the second-largest in the Emirate of Abu Dhabi. The freeways connecting Al-Ain, Abu Dhabi, and Dubai form a geographic triangle in the country, each city being roughly 130 kilometres  from the other two. The city vibes await you to explore Al Ain…

Al-Ain is also known as the “Garden City”, due to its greenery, particularly with regard to the city’s oases, parks, tree-lined avenues and decorative roundabouts, with there being strict height controls on new buildings, to no more than seven floors, an oasis around Al-Ain and Al-Hasa in Saudi Arabia are the most important in the Arabian Peninsula. That said, the region of Al-Ain and Al-Buraimi, altogether Tawam or Al-Buraimi Oasis, is of cultural and historical importance.

To the south of the city, near Oman, there is the man-made Lake Zakher, which resulted from the release of waste water from desalination plants. Also in this region, to the east of Jebel Hafeet, lies the area of Mezyad, which has a border crossing with Oman, and is where the historic Mezyad Fort is located.

With a population of 766,936 (as of 2017), it has the highest proportion of Emirati nationals (30.8%) in the country, though the majority of its residents are expatriates, particularly from the Indian subcontinent. Many people are from Bangladesh and

Pakistan, and a huge number of Afghans are from the province of Khost.

Al Ain is an important services centre for a wide area extending into Oman. Industry is growing, but is still on a small scale, and includes the Coca-Cola bottling plant and the Al Ain Portland Cement Works. The water in Al-Ain is of good quality. Service industries such as car sales, mechanics and other artisans are located in the area known as Sanaiya and Pattan Market. Social and governmental infrastructures include the Higher Colleges of Technology, well-equipped medical facilities including the teaching hospital at Tawam, Al Ain International Airport, and military training areas.

Part of the historically important Western Hajar region, the area of Al-Ain or Tawam has been inhabited for nearly 8,000 years, with archaeological sites showing human settlement at places like Al-Rumailah, Hili and Jabel Ḥafeet. These early cultures built “beehive” tombs for their dead and engaged in hunting and gathering in the area. The oases provided water for early farms until the modern age. In the 2000s, the Abu Dhabi Authority for Culture & Heritage lobbied for its recognition as a World Heritage Site by UNESCO, and in 2011, Al-Ain became the first World Heritage Site in the UAE to be recognized by UNESCO.

The city’s oases are known for their underground irrigation system that brings water from boreholes to water farms and palm trees. Falaj irrigation is an ancient system dating back thousands of years, and is used widely in Oman, the UAE, China, Iran and other countries. There are seven oases here. The largest is Al Ain Oasis, near Old Sarooj, and the smallest is Al-Jahili Oasis. The rest are Al Qattara, Al-Muʿtaredh, Al-Jimi, Al-Muwaiji, and Hili.

The city is known for its combination of modern and pre-modern buildings. The latter offer an insight into the city’s and country’s cultural heritage.

Currently, the city’s largest mosque is that of Shaikha Salamah. Once the under-construction Sheikh Khalifa Bin Zayed Al Nahyan Mosque is complete, it is expected to be the largest in the city, and one of the biggest mosques in the country.

Al-Ain is developing as a tourist destination. The dry desert air makes it a welcome retreat from the coastal humidity of the larger cities. Many Emirati nationals in Abu Dhabi have holiday houses in the city making it a popular weekend destination for families from the capital city. Its attractions include the Al Ain National Museum, the Al Ain Palace Museum, several restored forts and the Hili Archaeological Park site, dating back to the Bronze Age. Jebel Hafeet dominates the surrounding area. It is popular to visit to the mineral springs at Green Mubazzarah at the base of the mountain, and to drive to the mountaintop at sunset. Other attractions include Al Ain Zoo, an amusement park named “Hili Fun City”, many well-maintained parks popular with families in the summer evenings, and a heritage village. Opened in 2012, Wadi Adventure is located near Jebel Hafeet and provides a range of water-based activities including surfing, kayaking and rafting. On top of Jabel Hafeet is the Mercure Hotel. Mount Hafeet and the nearby ‘beehive’ tombs are part of what is known as “Jebel Hafeet Desert Park” or “Mezyad Desert Park”, which is meant to preserve the nature and geology of the area, besides attracting tourists.

Most commercial activity is centered in and around the town centre. Another popular pastime for Emiratis and expatriates alike is spending time in coffee shops and shisha cafes. There are many Café’s in Al-Ain, ranging in size and quality. The city also has an International standard go-kart circuit. Al-Ain Raceway was selected to host the 2007 Rotax Max World Karting Finals, an event which saw 220 drivers from over 55 different countries compete for the Karting world title. Al-Ain Raceway opened to the general public in May 2008 and proves a popular activity for local Emiratis and tourists alike. It was announced in late 2010 that the 2011 Rotax Max World Karting Finals will be held at Al-Ain Raceway, this will bring nearly 1000 tourists to the small garden city. Like the rest of the UAE, Al-Ain has strict laws governing the consumption and distribution of alcohol. Five facilities in the city currently serve alcohol, Four of which are hotels. In addition to the hotels, the Al Ain Equestrian, Shooting & Golf Club in Al-Maqam also serves alcohol.

Al-Ain is a cultural retreat for residents of the cities of Dubai and Abu Dhabi. It is home to a major festival of classical music, and is the home of Al Ain Club.

Jebel Hafeet. The second tallest mountain in the United Arab Emirates (1350 m), Jebel Hafeet is surrounded by flat plains on three sides, which afford spectacular views, especially at sunset. The road to the top winds around hairpin turns for 12 km. There are three rest points for viewing, and then at the very top is a large parking area with a cafeteria and 360 degree view of the entire area. Take care on the road as some drivers enjoy the excitement of the twists and turn too much. There is a hotel (Mecure Hafeet) at the top, as well as Green Mubazara Park and Ain Al Fada resorts at the bottom. Free.

Al-Khrair Animal Souq, Behind Bawadi Mall. Daylight. Recently relocated from near the Meyzad border, the livestock souq is open every day. Hundreds of camels and goats, alongside bales of fodder, are brought together to buy and sell. Dress conservatively. The traders are very friendly, especially to children. Some traders may ask for money (“baksheesh”) for letting children sit on a camel. Many traders will pick up children so that they can be photographed. Free.

Al Ain Museum and Fort. Free. Located on Al Ain Street (or “Main Street” as the locals call it), this fort was built to protect the oasis from raiders. It was used as the headquarters for Sheikh Zayed when he was the ruler of the Eastern Region of Abu Dhabi, prior to his ascending to Sheikh of Abu Dhabi itself. The museum recreates the way people of the region lived before the founding of the UAE.

Al Ain Oasis. The biggest of several oases in region, the oasis is made up of thousands of date palms. The oasis is located between the main souq area downtown and Al Ain street. Narrow roads run through the oasis, so you can drive through it, or you can walk. Walking in the oasis is especially nice when the sun is not directly overhead, as the palm trees offer cooling shade. Free.

There is also a large zoo and safari park in Al Ain that is quite popular with visiting tourists. Green Mubazzara is a lovely park next to Jebel Hafeet with hot springs gender separated bath houses. Women must bring a modest swimsuit and shower cap to cover their hair. You can also have a picnic or BBQ in designated areas or just put your feet in the streams of hot thermal water around the park.

At the foot of Jebel Hafeet, nestled amongst the hot springs and natural cave systems of the Green Mubazzarah, you will find WADI ADVENTURE – the Middle East’s first man made whitewater rafting, kayaking and surfing destination. Explore your limits with our intricate airpark, zip line, giant swing and climbing wall, or relax at the family pool with a number of food outlets to satisfy a variety of tastes. With world class activities and facilities, excellent service and a backdrop like no other, your day at Wadi Adventure can be as exhilarating or as relaxed as you want it to be.

Even Black (ladies’ traditional wear) 4 showrooms in Al Ain. With maximum designs for Abhaya, all showrooms are designed as Arabic Studios.

Al Ain is host to a wide range of palates and ethnicities when it comes to cuisine. Lebanese/Arabic food is usually cheapest; hotel restaurants usually the most expensive. The city is home to all manner of fast food like McDonald’s and Hardees, but there is little for most people to eat at those places. Some of the best and cheapest food in the city can be found at its many Indian restaurants. Portions are almost always generous, prices low, and quality excellent. Chinese food is at its best in the many Chinese restaurants. Residents find Al Ain’s selection to be more than adequate.

Most restaurants and cafes deliver to anywhere in the city. Delivery is quick and reliable and rarely costs extra.

Vegetarians will find the city’s selection of meals very satisfying. Vegetable and bean-heavy native dishes, the array of splendid pure vegetarian Indian cuisine, and the ready availability of fresh salads make eating in Al Ain a stress-free experience. Strict vegans may have a little difficulty communicating their precise demands, but most places offer vegan dishes and are always willing to accommodate a paying customer.

Most of the good restaurants are concentrated on Khalifa Street.

The main street in Mauteredh has a large number of cafeterias serving Lebanese to Indian food.

Alcohol is available in the main hotel restaurants. However, it is advised to drink in moderation as in common with the rest of the UAE; it is illegal to be intoxicated in public places.